Have your say -- who is the best of the new Doctors? 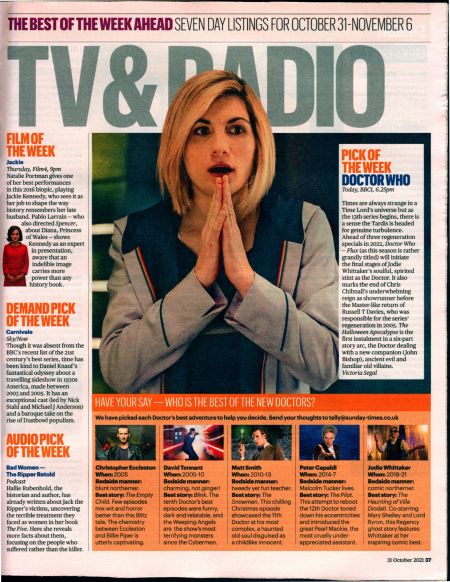 PICK OF THE WEEK

Times are always strange in a Time Lord's universe but as the 13th series begins, there is a sense the Tardis is headed for genuine turbulence. Ahead of three regeneration specials in 2022, Doctor Who — Flux (as this season is rather grandly titled) will initiate the final stages of Jodie Whittaker's soulful, spirited stint as the Doctor. It also marks the end of Chris Chibnall's underwhelming reign as showrunner before the Master-like return of Russell T Davies, who was responsible for the series' regeneration in 2005. The Halloween Apocalypse is the first instalment in a six-part story arc, the Doctor dealing with a new companion (John Bishop), ancient evil and familiar old villains. --- Have your say -- who is the best of the new Doctors?

We have picked each Doctor's best adventure to help you decide. Send your thoughts to telly@sunday-times.co.uk

Best story: The Empty Child. Few episodes mix wit and horror better than this Blitz tale. The chemistry between Eccleston and Billie Piper is utterly captivating.

Best story: Blink. The tenth Doctor's best episodes were funny, dark and relatable, and the Weeping Angels are the show's most terrifying monsters since the Cybermen.

Best story: The Snowmen. This chilling Christmas episode showcased the 11th Doctor at his most complex, a haunted old soul disguised as a childlike innocent.

Best story: The Pilot. This attempt to reboot the 12th Doctor toned down his eccentricities and introduced the great Pearl Mackie, the most cruelly under-appreciated assistant.