Having seven dogs in the house never seems like a lot 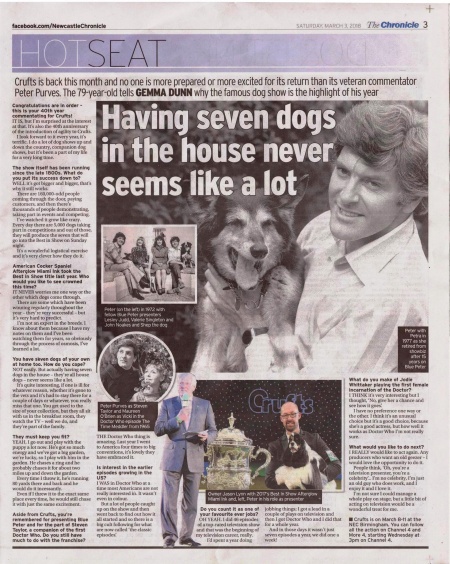 Crufts is back this month and no one is more prepared or more excited for its return than its veteran commentator Peter Purves. The 79-year-old tells GEMMA DUNN why the famous dog show is the highlight of his year

Congratulations are in order this is your 40th year commentating for Crufts!

IT IS, but I'm surprised at the interest at that. It's also the 40th anniversary of the introduction of agility to Crufts.

I look forward to it every year, it's terrific. I do a lot of dog shows up and down the country, companion dog shows, but it's been a part of my life for a very long time.

The show itself has been running since the late 1800s. What do you put its success down to?

WELL it's got bigger and bigger, that's why it still works.

There are 160,000-odd people coming through the door, paying customers, and then there's thousands of people demonstrating, taking part in events and competing.

I've watched it grow like crazy. Every day there are 5,000 dogs taking part in competitions and out of those, they will produce the seven that will go into the Best in Show on Sunday night.

It's a wonderful logistical exercise and it's very clever how they do it.

American Cocker Spaniel Afterglow Miami Ink took the Best in Show title last year. Who would you like to see crowned this time?

IT NEVER worries me one way or the other which dogs come through.

There are some which have been winning regularly throughout the year - they're very successful - but it's very hard to predict.

I'm not an expert in the breeds. I know about them because I have my notes on them and I've been watching them for years, so obviously through the process of osmosis, I've learned a lot.

You have seven dogs of your own at home too. How do you cope?

NOT easily. But actually having seven dogs in the house - they're all house dogs - never seems like a lot.

It's quite interesting, if one is ill for whatever reason, whether it's gone to the vets and it's had to stay there for a couple of days or whatever, you really miss that one. You get used to the size of your collection, but they all sit with us in the breakfast room, they watch the TV - well we do, and they're part of the family.

They must keep you fit?

YEAH, I go out and play with the puppy a lot now. He's got so much energy and we've got a big garden, we're lucky, so I play with him in the garden. He chases a ring and he probably chases it for about two miles up and down the garden.

Every time I throw it, he's running 80 yards there and back and he would do it incessantly.

Even if I threw it to the exact same place every time, he would still chase it with just the same excitement.

Aside from Crufts, you're remembered for presenting Blue Peter and for the part of Steven Taylor, a companion of the first Doctor Who. Do you still have much to do with the franchise?

THE Doctor Who thing is amazing. Last year I went to America four times to big conventions, it's lovely they have embraced it.

Is interest in the earlier episodes growing in the US?

I WAS in Doctor Who at a time most Americans are not really interested in. It wasn't even in colour.

But a lot of people caught up on the show and then went back to find out how it all started and so there is a big cult following for what are now called 'the classic episodes'.

Do you count it as one of your favourite ever jobs?

OH YEAH. I did 46 episodes of a top-rated television show and that was the beginning of my television career, really.

I'd spent a year doing jobbing things; I got a lead in a couple of plays on television and then I got Doctor Who and I did that for a whole year.

And in those days it wasn't just seven episodes a year, we did one a week!

What do you make of Jodie Whittaker playing the first female incarnation of the Doctor?

I THINK it's very interesting but I thought, 'No, give her a chance and see how it goes'.

I have no preference one way or the other. I think it's an unusual choice but it's a good choice, because she's a good actress, but how well it works as Doctor Who I'm not really sure.

I REALLY would like to act again. Any producers who want an old geezer - I would love the opportunity to do it.

People think, 'Oh, you're a television presenter, you're a celebrity!.. I'm no celebrity, I'm just an old guy who does work, and I enjoy it and 1 love it.

I'm not sure 1 could manage a whole play on stage, but a little bit of acting on television would be a wonderful treat for me.

Crufts is on March 8-11 at the NEC Birmingham. You can follow all the action on Channel 4 and More 4, starting Wednesday at 3pm on Channel 4.

Peter (on the left) in 1972 with fellow Blue Peter presenters Lesley Judd, Valerie Singleton and John Noakes and Shep the dog