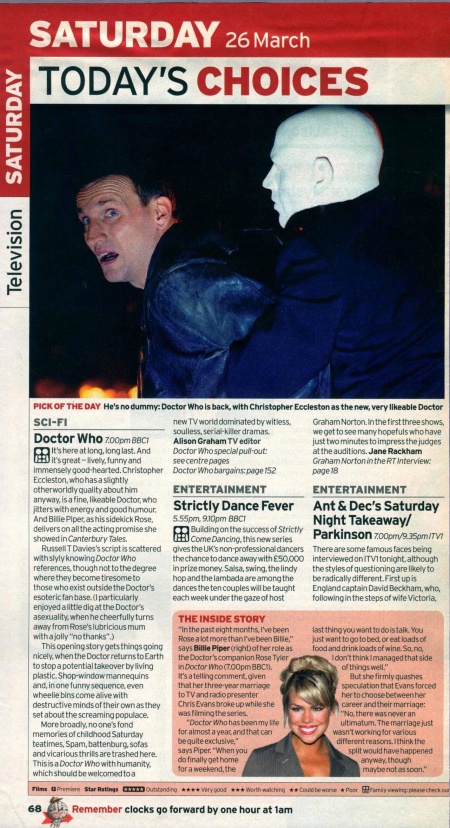 PICK OF THE DAY He's no dummy: Doctor Who is back, with Christopher Eccleston as the new, very likeable Doctor

It's here at long, long last. And it's great — lively, funny and immensely good-hearted. Christopher Eccleston, who has a slightly otherworldly quality about him anyway, is a fine, likeable Doctor, who jitters with energy and good humour. And Billie Piper, as his sidekick Rose, delivers on all the acting promise she showed in Canterbury Tales.

Russell T Davies's script is scattered with slyly knowing Doctor Who references, though not to the degree where they become tiresome to those who exist outside the Doctor's esoteric fan base. (I particularly enjoyed a little dig at the Doctor's asexuality, when he cheerfully turns away from Rose's lubricious mum with a jolly "no thanks".)

This opening story gets things going nicely, when the Doctor returns to Earth to stop a potential takeover by living plastic. Shop-window mannequins and, in one funny sequence, even wheelie bins come alive with destructive minds of their own as they set about the screaming populace.

More broadly, no one's fond memories of childhood Saturday teatimes, Spam, battenburg, sofas and vicarious thrills are trashed here. This is a Doctor Who with humanity, which should be welcomed to a new TV world dominated by witless, soulless, serial-killer dramas.

"In the past eight months, I've been Rose a lot more than I've been Billie," says Billie Piper (right) of her role as the Doctor's companion Rose Tyler in Doctor Who (7.00pm BBC1). It's a telling comment, given that her three-year marriage to TV and radio presenter Chris Evans broke up while she was filming the series.

"Doctor Who has been my life for almost a year, and that can be quite exclusive," says Piper. "When you do finally get home for a weekend, the last thing you want to do is talk. You just want to go to bed, or eat loads of food and drink loads of wine. So, no, I don't think I managed that side of things well."