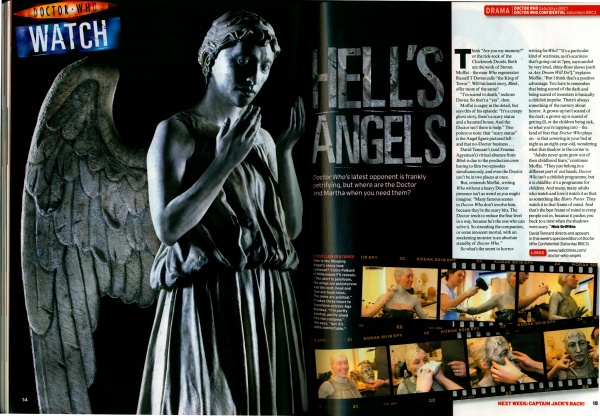 Doctor Who's latest opponent is frankly petrifying, but where are the Doctor and Martha when you need them?

Think "Are you my mummy?" or the tick-tock of the Clockwork Droids. Both are the work of Steven Moffat — the man Who regenerator Russell T Davies calls "the King of Terror". Will his latest story, Blink, offer more of the same?

Moffat is cagey in the detail, but says this of his episode: "It's a creepy ghost story, there's a scary statue and a haunted house. And the Doctor isn't there to help." Two points to note: that "scary statue" is the Angel figure pictured left — and that no-Doctor business .. .

David Tennant's (and Freema Agyeman's) virtual absence from Blink is due to the production crew having to film two episodes simultaneously, and even the Doctor can't be in two places at once.

But, contends Moffat, writing Who without a heavy Doctor presence isn't as weird as you might imagine: "Many famous scenes in Doctor Who don't involve him, because they're the scary bits. The Doctor tends to reduce the fear level in a way, because he's the one who can solve it. So stranding the companion, or some innocent mortal, with an awakening monster is an absolute standby of Doctor Who."

So what's the secret to horror-writing for Who? "It's a particular kind of scariness, as it's scariness that's going out at 7pm, surrounded by very loud, shiny-floor shows [such as Any Dream Will Do?]," explains Moffat. "But I think that's a positive advantage. You have to remember that being scared of the dark and being scared of monsters is basically a childish impulse. There's always something of the nursery about horror. A grown-up isn't scared of the dark; a grown-up is scared of getting ill, or the children being sick, so what you're tapping into — the kind of fear that Doctor Who plays on — is that cowering in your bed at night as an eight-year-old, wondering what that shadow in the corner is.

"Adults never quite grow out of their childhood fears," continues Moffat. "They just belong in a different part of our heads. Doctor Who isn't a childish programme, but it is childlike: it's a programme for children. And many, many adults who watch and love it watch it as that: as something like Harry Potter. They watch it in that frame of mind. And that's the best frame of mind to creep people out in, because it pushes you back to a time when the shadows were scary." Nick Griffiths

Caption: Chiselled features. How is the Weeping Angel's stony look achieved? Claire Folkard of Millennium FX reveals, The skirt is polyfoam, the wings are polystyrene and the vest, head and face are foam latex. The arms are painted." It takes three hours to transform actress Aga Blonksa. "I'm partly Painted, partly glued into the costume," she says, "but it's quite comfortable."