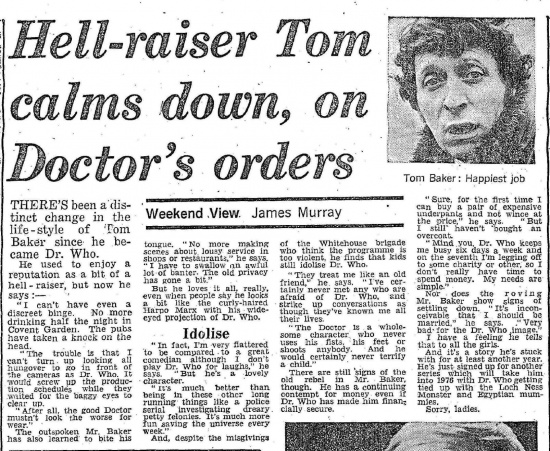 THERE'S been a distinct change in the life-style of Tom Baker since he became Dr. Who.

He used to enjoy a reputation as a bit of a hell raiser, but now he says : "I can't have even a discreet binge. No more drinking half the night in Covent Garden. The pubs have taken a knock on the head.

"The trouble is that I can't turn up looking all hungover to go in front of the cameras as Dr. Who. It would screw up the production schedules while they waited for the baggy eyes to clear up.

"After all, the good Doctor mustn't look the worse for wear."

The outspoken Mr. Baker has also learned to bite his tongue. "No more making scenes about, lousy service in shops or restaurants," he says. "I have to swallow rm. awful lot of banter. The old privacy has gone a bit."

But he loves it all, really, even when people sty he looks a bit like the curly-haired Harpo Marx with his wide-eyed projection of Dr. Who.

"In fact, I'm very flattered to be compared to a great comedian although I don't play Dr. Who for laughs," he says. "But he's a lovely character.

"It's much better than being in these other long running things like a police serial investigating dreary. petty felonies. It's much more fun saving the universe every week."

And, despite the misgivings of the Whitehouse brigade who think the programme is too violent, he finds that kids still idolise Dr. Who.

"They treat me like an old friend," he. says. "I've certainly never met any who are afraid of Dr. Who, and strike up conversations as though they've known me all their lives.

"The Doctor is a wholesome character who never uses his fists, his feet or shoots anybody. And he would certainly never terrify a child."

There are still signs of the old rebel in Mr. Baker, though. He has a continuing contempt for money even if Dr. Who has made him financially secure.

"Sure, for the first time I can buy a pair of expensive underpants and not wince at the price," he says. "But I still haven't bought an overcoat.

"Mind you, Dr. Who keeps me busy six days a week and on the seventh. I'm legging off to some charity or other, so I don't really have time to spend money. My needs are' simple."

Nor does the roving Mr. Baker show signs of settling down. "It's inconceivable that I should be married," he says. "Very bad for the Dr. Who image."

I have a feeling he tells that to all the girls.

And it's a story he's stuck with for at least another year. He's just signed up for another' series which will take him into 1978 with Dr. Who getting tied up with the Loch Ness Monster and Egyptian mummies.