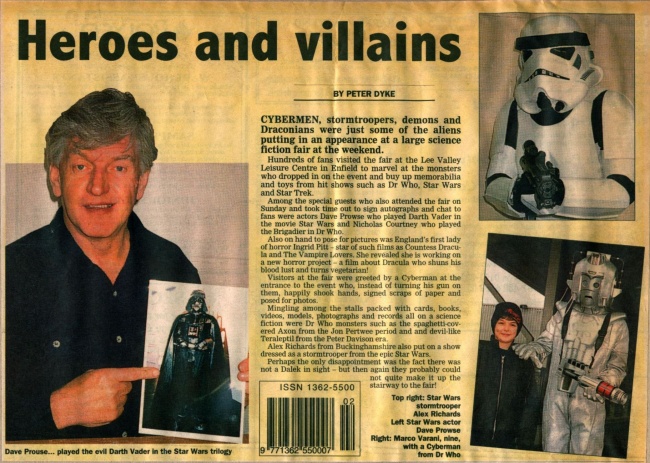 CYBERMEN, stormtroopers, demons and Draconians were just some of the aliens putting in an appearance at a large science fiction fair at the weekend.

Hundreds of fans visited the fair at the Lee Valley Leisure Centre in Enfield to marvel at the monsters who dropped in on the event and buy up memorabilia and toys from hit shows such as Dr Who, Star Wars and Star Trek.

Among the special guests who also attended the fair on Sunday and took time out to sign autographs and chat to fans were actors Dave Prowse who played Darth Vader in the movie Star Wars and Nicholas Courtney who played the Brigadier in Dr Who.

Also on hand to pose for pictures was England's first lady of horror Ingrid Pitt - star of such films as Countess Dracula and The Vampire Lovers. She revealed she is working on a new horror project - a film about Dracula who shuns his blood lust and turns vegetarian!

Visitors at the fair were greeted by a Cyberman at the entrance to the event who, instead of turning his gun on them, happily shook hands, signed scraps of paper and posed for photos.

Mingling among the stalls packed with cards, books, videos, models, photographs and records all on a science fiction were Dr Who monsters such as the spaghetti-covered Axon from the Jon Pertwee period and and devil-like Teraleptil from the Peter Davison era.

Alex Richards from Buckinghamshire also put on a show dressed as a stormtrooper from the epic Star Wars.

Perhaps the only disappointment was the fact there was not a Dalek in sight - but then again they probably could not quite make it up the stairway to the fair!