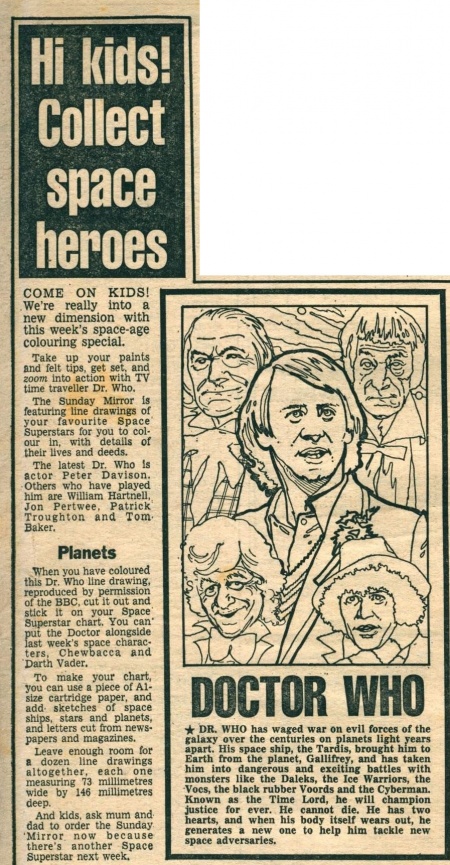 COME ON KIDS! We're really into a new dimension with this week's space-age colouring special.

Take up your paints and felt tips, get set, and zoom into action with TV time traveller Dr. Who.

The Sunday Mirror is featuring line drawings of your favourite Space Superstars for you to colour in, with details of their lives and deeds.

The latest Dr. Who Is actor Peter Davison. Others who have played him are William Hartnell, Jon Pertwee, Patrick Troughton and Tom Baker,

When you have coloured this Dr. Who line drawing, reproduced by permission of the BBC, cut it out and stick it on your Space Superstar chart. You can' put the Doctor alongside last week's space characters, Chewbacca and Darth Vader.

To make your chart, you can use a piece of A1-size cartridge paper, and add sketches of space ships, stars and planets, and letters cut from newspapers and magazines.

And kids, ask mum and dad to order the Sunday Mirror now because there's another Space Superstar next week.

DR. WHO has waged war on evil forces of the galaxy over the centuries on planets light years apart. His space ship, the Tardis, brought him to Earth from the planet, Gallifrey, and has taken him into dangerous and exciting battles with monsters like the Daleks, the Ice Warriors, the Vocs, the black rubber Voords and the Cyberman. Known as the Time Lord, he will champion justice for ever. He cannot die. He has two hearts, and when his body itself wears out, he generates a new one to help him tackle new space adversaries.