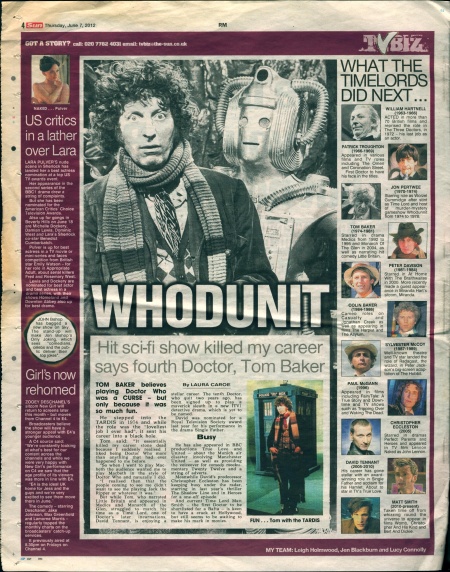 TOM BAKER believes playing Doctor Who was a CURSE - but only because it was so much fun.

He stepped into the TARDIS in 1974 and while the role was the "loveliest job I ever had", it sent his career into a black hole.

Tom said: "It essentially killed my career stone dead because I suddenly realised I liked being Doctor Who more than anything that had ever happened to me before.

"I realised then that the people coming to see me didn't want to see me playing Jack the Ripper or whatever it was."

But while Tom, who narrated Little Britain and appeared in Medics and Monarch of the Glen, struggled to match his time as a Time Lord, one of Doctor's later incarnations, David Tennant, is enjoying a stellar career. The tenth Doctor, who quit two years ago, has been signed up to play a maverick sleuth in a new ITV1 detective drama, which is yet to be named.

David was nominated for a Royal Television Society award last year for his performance in the drama Single Father.

He has also appeared in BBC productions True Love and United - about the Munich air disaster involving Manchester United - as well as providing the voiceover for comedy mockumentary Twenty Twelve and a string of adverts.

Meanwhile David's predecessor Christopher Eccleston has been keeping busy under the radar, starring in last year's thriller The Shadow Line and in Heroes for a one-off episode.

And current Time Lord Matt Smith - the first Doctor to be shortlisted for a Bafta -- is keen to have a crack at Hollywood, but still seems to be waiting to make his mark in movies.

Caption: FUN ... Tom with the TARDIS

WHAT THE TIMELORDS DID NEXT...

PATRICK TROUGHTON (1966-1969) Appeared in various films and TV roles including The Omen and Coronation Street. First Doctor to have his face in the titles.

JON PERTWEE (1970-1974) Starring role as Worzel Gummidge after stint as Time Lord and host of murder-mystery gameshow Whodunnit from 1974 to 1978.

PETER DAVISON (1981-1984) Starred in At Home With The Braithwaites in 2000. More recently made a guest appearance in Miranda Hart's sitcom, Miranda.

COLIN BAKER (1984-1986) Cameo roles on Casualty and Jonathan Creek as well as appearing in films The Harpist and The Asylum.

SYLVESTER McCoy (1987-1989) Well-known theatre and TV star landed the role of Radagast, the wizard, in Peter Jackson's big-screen adaptation of The Hobbit.

PAUL McGANN (1996) Appeared in films including FairyTale: A True Story and Downtime and TV shows such as Tripping Over and Waking The Dead.

DAVID TENNANT (2005-2010) His career has gone stellar with an award-winning role in Single Father and acclaim for his Hamlet. About to star in TV's True Love.

MATT SMITH (2010-present) Taken time off from whizzing round the universe to appear in films Womb. Christopher And His Kind and Bert And Dickie.