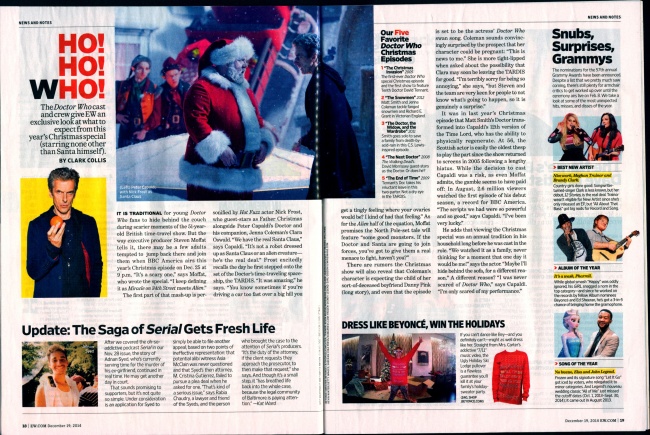 The Doctor Who cast and crew give EW an exclusive look at what to expect from this year's Christmas special (starring none other than Santa himself).

IT IS TRADITIONAL for young Doctor Who fans to hide behind the couch during scarier moments of the 51-year-old British time-travel show. But the way executive producer Steven Moffat tells it, there may be a few adults tempted to jump back there and join them when BBC America airs this year's Christmas episode on Dec. 25 at 9 p.m. "It's a scary one," says Moffat, who wrote the special. "I keep defining it as Miracle on 34th Street meets Alien."

The first part of that mash-up is personified by Hot Fuzz actor Nick Frost, who guest-stars as Father Christmas alongside Peter Capaldi's Doctor and his companion, Jenna Coleman's Clara Oswald. "We have the real Santa Claus," says Capaldi. "It's not a robot dressed up as Santa Claus or an alien creature—he's the real deal." Frost excitedly recalls the day he first stepped onto the set of the Doctor's time-traveling spaceship, the TARDIS. "It was amazing" he says. "You know sometimes if you're driving a car too fast over a big hill you get a tingly feeling where your ovaries would be? I kind of had that feeling." As for the Alien half of the equation, Moffat promises the North Pole-set tale will feature "some good monsters. If the Doctor and Santa are going to join forces, you've got to give them a real menace to fight, haven't you?"

There are rumors the Christmas show will also reveal that Coleman's character is expecting the child of her sort-of-deceased boyfriend Danny Pink (long story), and even that the episode is set to be the actress' Doctor Who swan song. Coleman sounds convincingly surprised by the prospect that her character could be pregnant: "This is news to me." She is more tight-lipped when asked about the possibility that Clara may soon be leaving the TARDIS for good. "I'm terribly sorry for being so annoying," she says, "but Steven and the team are very keen for people to not know what's going to happen, so it is genuinely a surprise."

It was in last year's Christmas episode that Matt Smith's Doctor transformed into Capaldi's 12th version of the Time Lord, who has the ability to physically regenerate. At 56, the Scottish actor is easily the oldest thesp to play the part since the show returned to screens in 2005 following a lengthy hiatus. While the decision to cast Capaldi was a risk, as even Moffat admits, the gamble seems to have paid off: In August, 2.6 million viewers watched the first episode of his debut season, a record for BBC America. "The scripts we had were so powerful and so good," says Capaldi. "I've been very lucky."

He adds that viewing the Christmas special was an annual tradition in his household long before he was cast in the role. "We watched it as a family, never thinking for a moment that one day it would be me!" says the actor. "Maybe I'll hide behind the sofa, for a different reason." A different reason? "I was never scared of Doctor Who," says Capaldi. "I'm only scared of my performance."

Our Favorite Doctor Who Christmas Episodes

1 "The Christmas Invasion" 2005 The first-ever Doctor Who special Christmas episode and the first show to feature Tenth Doctor David Tennant.

3 "The Doctor, the Widow, and the Wardrobe" 2011 Smith goes solo to save a family from death-by-acid-rain in this C.S. Lewis-inspired episode.

4 "The Next Doctor" 2008 The Walking Dead's David Morrissey guest-stars as the Doctor. Or does he?

5 'The End of Time" 2009 Tennant's Doc takes his reluctant leave in this two-parter. Not a dry eye in the TARDIS.