Hooked on Who (Starlog) 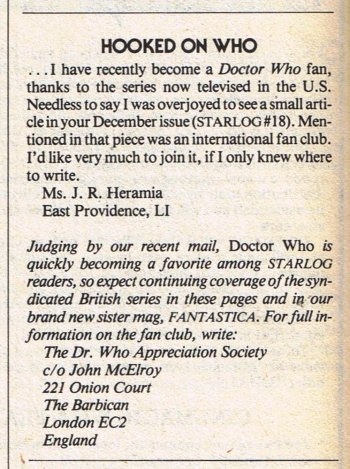 ... I have recently become a Doctor Who fan, thanks to the series now televised in the U.S. Needless to say I was overjoyed to see a small article in your December issue (STARLOG # 18). Mentioned in that piece was an international fan club. I'd like very much to join it, if I only knew where to write.

Judging by our recent mail, Doctor Who is quickly becoming a favorite among STARLOG readers, so expect continuing coverage of the syndicated British series in these pages and in our brand new sister mag, FANTASTICA. For full information on the fan club, write: