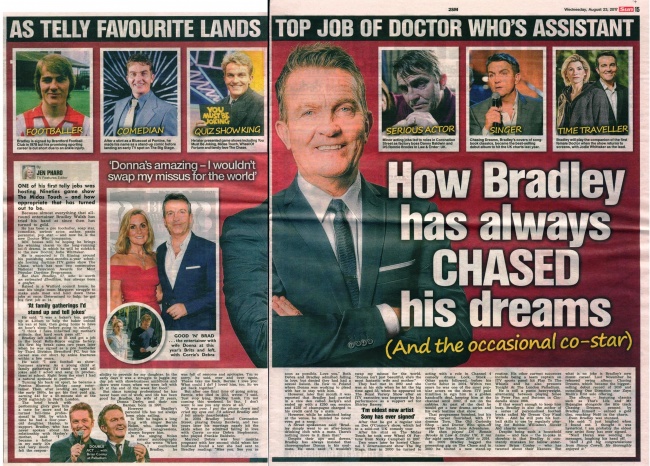 AS TELLY FAVOURITE LANDS TOP JOB OF DOCTOR WHO'S ASSISTANT

ONE of his first telly jobs was hosting Nineties game show The Midas Touch - and how appropriate that has turned out to be.

Because almost everything that all-round entertainer Bradley Walsh has tried his hand at since then has turned to gold.

He has been a pro footballer, soap star, comedian, serious actor, author, panto perennial, pop star — and now he is the new Doctor Who companion.

BBC bosses will be hoping he brings his winning charm to the long-running sci-fi drama, in which he will be sidekick to the new Doctor, Jodie Whittaker.

He is expected to fit filming around his punishing nine-months-a-year schedule hosting daytime ITV game show The Chase, which has won two consecutive National Television Awards for Most Popular Daytime Programme.

But then Bradley, 57, who is worth an estimated £5million, has always been a grafter.

Raised in a Watford council house, he saw his single mum Margaret struggle to make ends meet and hold down three jobs at once. Determined to help, he got his first job at 14.

Bradley is signed by Brentford Football Club in 1978 but his promising sporting career is cut short due to an ankle injury.

After a stint as a Bluecoat at Pontins, he made his name as a stand-up comic before landing an early TV spot on The Big Stage.

He later presented game shows including You Must Be Joking, Midas Touch, Wheel Of Fortune and family fave The Chase.

He said: "I was a baker's boy, getting up at 4.30am to help the baker unload his van at 5am, then going home to have an hour's sleep before going to school.

"I think I have inherited my mother's attitude, that hard work pays off."

Bradley left school at 16 and got a job in the local Rolls-Royce engine factory. His first big break came two years later when he was signed as a pro footballer by Third Division Brentford FC, but his career was cut short by ankle fractures within a few years.

He said: "I saw football as show-business anyway. As a young child at family gatherings I'd stand up and tell jokes and I acted and sang in productions at school. Right from the start I had a natural aptitude to perform."

Turning his back on sport, he became a Pontins Bluecoat holiday camp entertainer. Then, after landing an agent in the early 1980s, he got his first paid gig, earning £45 for a 40-minute slot at the DOB nightclub in North London.

The brief brush with performing glory gave him a taste for more and he turned full-time professional in 1986, by which time he had a four-year-old daughter, Hayley, to support. Bradley, who has never spoken about his relationship with Hayley's mother, said: "I became a father in my early 20s and very much felt the responsibility to provide for my daughter. In the early days it was a struggle to juggle my day job with showbusiness ambitions and there were times when we were left with £5 at the end of the week for food."

But since turning professional he has never been out of work, and life has been good for Bradley, his wife of 20 years, Donna Derby, and their son Barney, born in 1997.

However Bradley's personal life has not always been plain sailing.

In 1989 he began a long fling with singer Bernie Nolan, who, despite his multiple transgressions, always forgave him.

In the singing Nolan sisters' autobiography she wrote: When I confronted Bradley, he was full of remorse and apologies. 'I'm so sorry,' he said, over and over again. 'Please take me back, Bernie. I love you.' What could I do? I loved him, too. So we got back together."

But after one final time of going astray, Bernie, who died in 2013, wrote: "I said, 'Just stop lying, Bradley. Look, I'm not coming this weekend. In fact, I don't want to see you any more at all.'

"It was over. I put the phone down and cried my eyes out. I'd adored Bradley and I felt utterly heartbroken."

Married Debra was four months pregnant with her second child when her husband found a text she had sent to Bradley reading: "Miss you. See you as soon as possible. Love you." Both Debra and Bradley admitted falling in love, but denied they had had a sexual liaison. He flew to Poland where Donna was working to plead with her to stay with him.

However, later that month it was reported that Bradley had partied in a vice den called Jaclyn's and ended up with a £250 sex session and £235 of champagne charged to his credit card by a mate.

However, while he admitted being at the venue, he insisted he never even got a snog.

A Street spokesman said: "Bradley simply went to an after-hours drinking club with a mate. There's nothing more to it than that."

Despite their ups and downs, Bradley has always insisted that choreographer Donna is his soul-mate. He once said: "I wouldn't

swap my missus for the world. "Donna isn't just beautiful, she's the most fantastic wife and mother."

They had met in 1992 and she was at his side when he hit the big time aged 33, when he appeared on The Royal Variety Show after an ITV executive was impressed by his performance as a support act for Shirley Bassey.

After that he got a regular slot on Des O'Connor 's show, which led to a sold-out UK comedy tour.

After his stint on The Midas Touch he took over Wheel Of Fortune from Nicky Campbell in 1997.

Two years later he hosted Channel 5 entertainment show The Big Stage, then in 2000 he turned to

acting with a role in Channel 4 comedy drama Lock, Stock ... Other parts followed, before his Corrie debut in 2004. Within two years he was one of the most popular actors on the show. ITV paid £1million to sign him in a golden handcuffs deal, keeping him at the channel until 2007, if not on the cobbles. As part of the deal he would get a new drama series and his own teatime chat show.

That programme bombed, but his acting career flourished, with TV dramas Torn, The Old Curiosity Shop — and Doctor Who spin-off series The Sarah Jane Adventures.

routine. His other current successes include being a team captain on ITV sports panel hit Play To The Whistle and he also presents Tonight At The London Palladium.

He is still a panto heavyweight, alternating between playing Smee in Peter Pan and Buttons in Cinderella since 1988.

If that wasn't enough to keep him busy, Bradley is also the author of a series of personalised football books called My Dream Cup Final With ... And he still puts his football skills to use by regularly playing for Robbie Williams's Soccer Aid charity event.

Despite being such a household name — and face — the in-joke in showbiz is that Bradley is constantly mistaken for fellow entertainer Brian Conley — who has tweeted about their likeness. But what is no joke is Bradley's new music career. Last November he released swing album Chasing Dreams, which became the biggest-selling debut record of 2016 and outselling One Direction star Zayn Malik's first solo offering.

The album — featuring classics such as That's Life and Mr Bojangles alongside the title track Chasing Dreams, penned by Bradley himself — earned a gold disc, reaching No10 in the charts.

Even Bradley was stunned.

He said: "I just laughed when I found out. I thought it was hysterical. I am probably the oldest new artist Sony has ever signed.

"Niall Horan was sending me messages, laughing his head off.

"And I got big congratulations from Simon Cowell. He thoroughly enjoyed it."

GOOD 'N' BRAD .. the entertainer with wife Donna at this year's Brits and left, with Corrie's Debra

Bradley will play the companion of the first female Doctor when the show returns to screens, with Jodie Whittaker as the lead.