How Dr Who model-maker fulfilled his boyhood dream 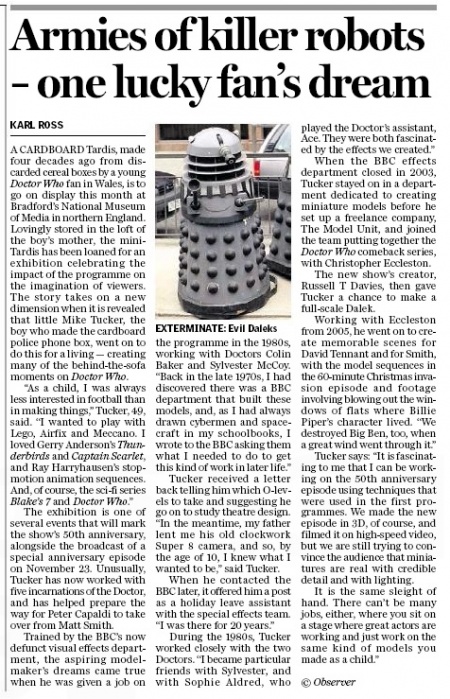 A CARDBOARD Tardis, made four decades ago from discarded cereal boxes by a young Doctor Who fan in Wales, is to go on display this month at Bradford's National Museum of Media in northern England. Lovingly stored in the loft of the boy's mother, the miniTardis has been loaned for an exhibition celebrating the impact of the programme on the imagination of viewers. The story takes on a new dimension when it is revealed that little Mike Tucker, the boy who made the cardboard police phone box, went on to do this for a living — creating many of the behind-the-sofa moments on Doctor Who.

"As a child, I was always less interested in football than in making things," Tucker, 49, said. "I wanted to play with Lego, Airfix and Meccano. I loved Gerry Anderson's Thunderbirds and Captain Scarlet, and Ray Harryhausen's stopmotion animation sequences. And, of course, the sci-fi series Blake's 7 and Doctor Who."

The exhibition is one of several events that will mark the show's 50th anniversary, alongside the broadcast of a special anniversary episode on November 23. Unusually, Tucker has now worked with five incarnations of the Doctor, and has helped prepare the way for Peter Capaldi to take over from Matt Smith.

Trained by the BBC's now defunct visual effects department, the aspiring modelmaker's dreams came true when he was given a job on the programme in the 1980s, working with Doctors Colin Baker and Sylvester McCoy. "Back in the late 1970s, I had discovered there was a BBC department that built these models, and, as I had always drawn cybermen and spacecraft in my schoolbooks, I wrote to the BBC asking them what I needed to do to get this kind of work in later life."

Tucker received a letter back telling him which O-levels to take and suggesting he go on to study theatre design. "In the meantime, my father lent me his old clockwork Super 8 camera, and so, by the age of 10, I knew what I wanted to be," said Tucker.

When he contacted the BBC later, it offered him a post as a holiday leave assistant with the special effects team. "I was there for 20 years."

During the 1980s, Tucker worked closely with the two Doctors. "I became particular friends with Sylvester, and with Sophie Aldred, who played the Doctor's assistant, Ace. They were both fascinated by the effects we created."

When the BBC effects department closed in 2003, Tucker stayed on in a department dedicated to creating miniature models before he set up a freelance company, The Model Unit, and joined the team putting together the Doctor Who comeback series, with Christopher Eccleston.

Working with Eccleston from 2005, he went on to create memorable scenes for David Tennant and for Smith, with the model sequences in the 60-minute Christmas invasion episode and footage involving blowing out the windows of flats where Billie Piper's character lived. "We destroyed Big Ben, too, when a great wind went through it."

Tucker says: "It is fascinating to me that I can be working on the 50th anniversary episode using techniques that were used in the first programmes. We made the new episode in 3D, of course, and filmed it on high-speed video, but we are still trying to convince the audience that miniatures are real with credible detail and with lighting.

It is the same sleight of hand. There can't be many jobs, either, where you sit on a stage where great actors are working and just work on the same kind of models you made as a child."