How Our British Time Lord Has Conquered Planet Earth 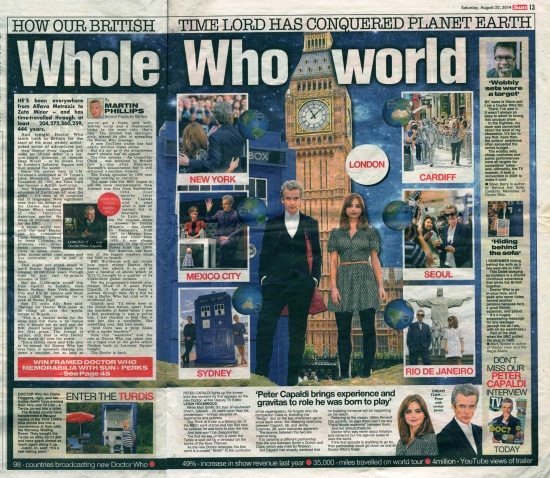 And tonight Doctor Who lands back in Britain for the start of his most widely anticipated series of adventures yet.

New Doctor Peter Capaldi will make his official debut in a feature-length premiere of episode Deep Breath - to be shown first in London's Leicester Square and then around the world.

Since his arrival here in I.M. Foreman's scrapyard at 76 Totter's Lane, Shoreditch, East London, on November 23, 1963, the Time Lord has become a British institution.

And Whomania has grabbed the attention of Earthlings all over the globe - it's seen in 98 countries and 15 languages. More significant even than his defeat of the Daleks has been Doctor Who's cracking of the lucrative American market. He rakes in millions there for the BBC.

A recent world tour with the new Doctor and his companion Clara Oswald, played by Jenna Coleman, to promote the latest series covered seven cities in seven countries. across seven time zones and five continents - all in just 12 days.

That might not sound much to tenth Doctor David Tennant, who covered 99.99 trillion years through time in just two 45-minute episodes in 2007.

But the 35,000-mile round trip from Cardiff to London, then Seoul, Sydney, New York, Mexico City and Rio de Janeiro saw more than 11,000 fans queuing for a peek at Series Eight.

Sun TV critic Ally Ross said: "Ratings for Doctor Who seem to be rising all over the world, except in Britain.

"This is a crucial series for the show here but there is no reason why it should not do well and the BBC should never have axed it in the first place. The format is perfect, and that is why Doctor Who works all over the world.

"It's a family show and kids love to be scared. All Doctor Who has ever been is monsters chasing you down a corridor, but as long as you've got a funny and well-written script and a charismatic bloke in the main role, that's fine." The internet has, appropriately. played its part in spreading the Doctor Who message.

A new YouTube trailer has had nearly 4million views online.

But it's not as if the programme hasn't always had an appeal.

The first episode - An Unearthly Child - was televised in Britain Just a day after President Kennedy's assassination but it still attracted 4.4million viewers.

The Dalek episodes in 1964 sent ratings soaring to 14 million.

The same year the BBC began to sell the show internationally. New Zealand was first from September 1964 , four months later came Canada and a year after it was an instant hit in Australia.

In Latin America the original series - known as Doctor Misterio - was shown in Venezuela from 1967, in Mexico from 1968 and Chile from 1969. It was shown sparsely in the United States from the 1970s but America has been one of the biggest markets since the 2005 re-launch.

BBC Worldwide will not reveal how much money Doctor Who makes, but admits it is one of just a handful of shows which in 2012/13 brought in a quarter of its £700million global revenue.

For the programme's newest star. former Thick of It actor Peter Capaldi. it has already been a journey through time. As a kid he ran a Doctor Who fan club with a childhood pal.

Capaldi said: "I'd never been in the police box before, apart from the wardrobe at home when I was a kid, pretending it was a police box. I was shocked to find that it was just like a wardrobe, like something your dad had made.

"And there was a prop bloke with a smoke machine!"

Now that "wardrobe" and the role of Doctor Who has taken him on a rapid tour of the globe which finishes back in Leicester Square tonight.

The Doctor is back.

'Wobbly sets were a target'

MY name is Steve and I am a Doctor Who fan.

There. I've said it. It wasn't always so easy to admit to loving this unusual show.

In the Eighties, my mum was concerned about the level of my obsession. It's fair to say that, back then, the writers' ambitions often exceeded the series budget.

The wobbly sets, cheap costumes and panto performances were all targets for comedians' jokes and, ultimately, the TV axemen. It took a reinvention in 2005 to make it cool.

Steve Berry is author of Behind the Sofa: Celebrity Memories of Doctor Who.

'Hiding behind the sofa'

I REMEMBER hiding behind the sofa as a two-year-old in 1967.

This Dalek-dodging as toddlers is a shared childhood experience that binds the British together.

Doctor Who is an in-your-face, sci-fi geek who never hides behind another persona because he's a great British eccentric, and proud.

It's a hugely empowering message for any teenager (accept me as I am, with all my weirdness.)

Mark Speed is author of Doctor How and the Illegal Aliens.

Enter the Turdis DOCTOR Who fan Claire Hoggans, right, and her hubby Justin have created their very own Dr Loo - a Tardis turned into a toilet.

The Bristol couple have transformed a life-size replica of the Time Lord's blue phone box into a convenience at their café, the Warmley Waiting Room. They bought the Tardis on eBay for £1,800 and have spent almost as much again doing it up.

PETER CAPALDI lights up the screen from the moment he first appears as the new Doctor, writes Deputy TV Editor LEIGH HOLMWOOD.

While Matt Smith, 31. had an exuberant charm. Capaldi - 25 years older than his predecessor - brings decades of experience and gravitas.

The Thick of It star is a lifelong fan of the BBC1 sci-fi drama and has told how he believes he was born to play the role.

And fans won't be disappointed.

The first we see of him is when the Tardis is spat out by a dinosaur on the banks of the River Thames.

As the new Doctor emerges. his first word is a crazed "Shhh!" In the confusion of his regeneration, he forgets who his companion Clara is, branding her "thingy". But as the two characters get to know each other, the blistering chemistry between Capaldi, 56, and Jenna Coleman, 28, soon becomes apparent.

The scenes between the two are mesmerising.

It is certainly a different partnership than the one between Smith's Doctor and Clara, which was riven by flirtation.

But Capaldi has already declared that

no budding romance will be happening on his watch.

Referring to the classic 1990s Renault Clio adverts, he says there won't be any "Papa-Nicole moments" between them.

And nor should there be.

Doctor Who was never about flirtation and romance but the age-old quest to save the world.

If the first episode is anything to go by their partnership could go down as one of Doctor Who's finest.