How will Who lose his Lalla? 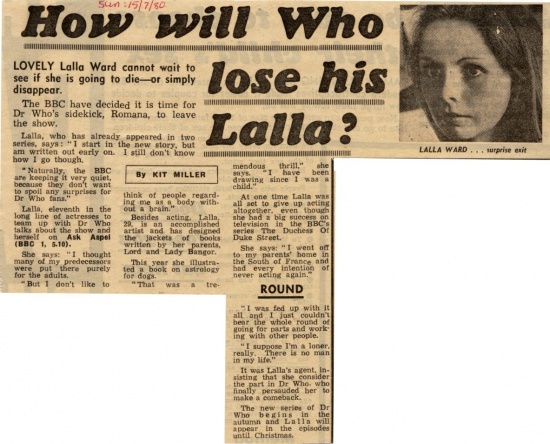 LOVELY Lalla Ward cannot wait to see if she is going to die—or simply disappear.

The BBC have decided it is time for Dr Who's sidekick, Romana, to leave the show.

Lalla, who has already appeared in two series, says : "I start in the new story, but am written out early on. I still don't know how I go though.

"Naturally, the BBC are keeping it very quiet, because they don't want to spoil any surprises for Dr Who fans."

Lalla, eleventh in the long line of actresses to team up with Dr Who talks about the show and herself on Ask Aspel (BBC 1, 5.10).

She says: "I thought many of my predecessors were put there purely for the adults.

"But I don't like to think of people regarding me as a body without a brain."

Besides acting, Lalla, 29, is an accomplished artist and has designed the jackets of books written by her parents, Lord and Lady Bangor.

This year she illustrated a book on astrology for dogs.

"That was a tremendous thrill," she says. "I have been drawing since I was a child."

At one time Lalla was all set to give up acting altogether, even though she had a big success on television in the BBC's series The Duchess Of Duke Street.

She says: "I went off to my parents' home in the South of France and had every intention of never acting again."

I was fed up with it all and I just couldn't bear the whole round of going for parts and working with other people.

"I suppose I'm a loner, really. There is no man in my life."

It was Lalla's agent, insisting that she consider the part in Dr Who, who finally persauded her to make a comeback.

The new series of Dr Who begins in the autumn and Lalla will appear in the episodes until Christmas.