I'm lucky to have Billie--she's hot! 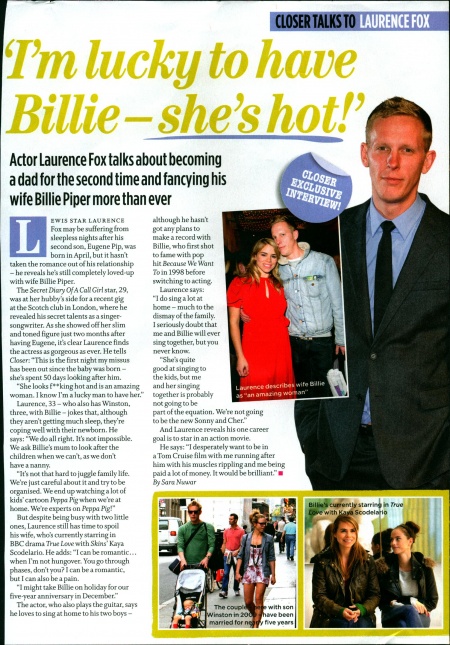 Fox may be suffering from sleepless nights after his second son, Eugene Pip, was born in April, but it hasn't taken the romance out of his relationship — he reveals he's still completely loved-up with wife Billie Piper.

The Secret Diary Of A Call Girl star, 29, was at her hubby's side for a recent gig at the Scotch club in London, where he revealed his secret talents as a singer-songwriter. As she showed off her slim and toned figure just two months after having Eugene, it's clear Laurence finds the actress as gorgeous as ever. He tells Closer: "This is the first night my missus has been out since the baby was born —she's spent 50 days looking after him.

"She looks f**king hot and is an amazing woman. I know I'm a lucky man to have her."

Laurence, 33 — who also has Winston, three, with Billie — jokes that, although they aren't getting much sleep, they're coping well with their newborn. He says: "We do all right. It's not impossible. We ask Billie's mum to look after the children when we can't, as we don't have a nanny.

"It's not that hard to juggle family life. We're just careful about it and try to be organised. We end up watching a lot of kids' cartoon Peppa Pig when we're at home. We're experts on Peppa Pig!"

But despite being busy with two little ones, Laurence still has time to spoil his wife, who's currently starring in BBC drama True Love with Skins' Kaya Scodelario. He adds: "I can be romantic... when I'm not hungover. You go through phases, don't you? I can be a romantic, but I can also be a pain.

"I might take Billie on holiday for our five-year anniversary in December."

The actor, who also plays the guitar, says he loves to sing at home to his two boys — although he hasn't got any plans to make a record with Billie, who first shot to fame with pop hit Because We Want To in 1998 before switching to acting.

Laurence says: "I do sing a lot at home — much to the dismay of the family. I seriously doubt that me and Billie will ever sing together, but you never know.

And Laurence reveals his one career goal is to star in an action movie.

He says: "I desperately want to be in a Tom Cruise film with me running after him with his muscles rippling and me being paid a lot of money. It would be brilliant."

Caption: The couple here with son Winston in 2000 - have been married for nearly five years