ITV Declares War on Dr Who 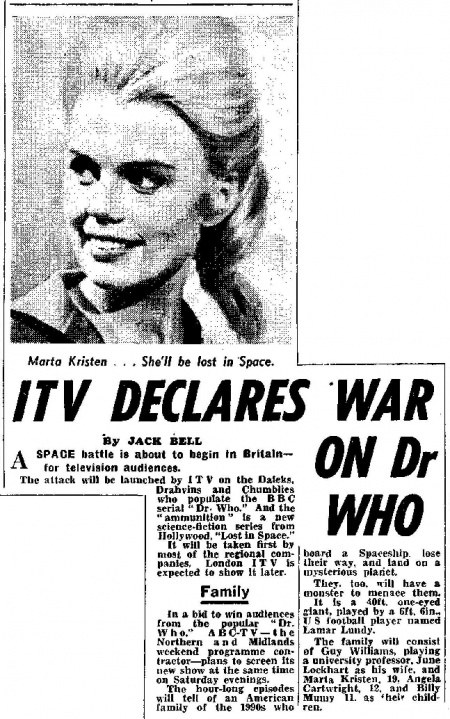 A SPACE battle is about to begin in Britain— for television audiences.

The attack will be launched by ITV on the Daleks, Drahvins and Chumblies, who populate the BBC serial "Dr. Who." And the "ammunition" is a new science-fiction series from Hollywood, "Lost in Space."

It will be taken first by most of the regional companies, London I T V is expected to show it later.

In a bid to win audiences from the popular "Dr. Who." ABC-TV—the Northern and Midlands weekend programme contractor—plans to screen its new show at the same time on Saturday evenings.

The hour-long episodes will tell of an American family of the 1990s who board a Spaceship lose their way, and land on a mysterious planet.

They, too, will have a monster to menace them.

It is a 40ft. one-eyed giant, played by a 6ft. 6in. US football player named Lamar Lundy.

The family will consist of Guy Williams, playing a university professor, Jane Lockhart as his wife, and Marta Kristen, 19, Angela Cartwright, 12, and Billy Mumy 11, as their children.