ITV to battle Doctor Who with £6m fantasy drama 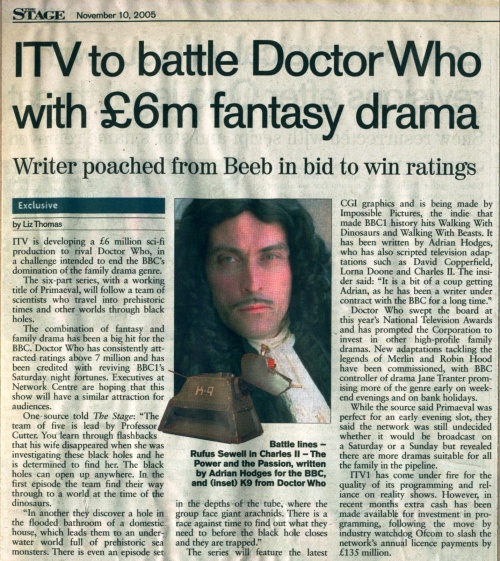 Writer poached from Beeb in bid to win ratings

ITV is developing a £6 million sci-fi production to rival Doctor Who, in a challenge intended to end the BBC's domination of the family drama genre.

The six-part series, with a working title of Primaeval, will follow a team of scientists who travel into prehistoric times and other worlds through black holes.

The combination of fantasy and family drama has been a big hit for the BBC. Doctor Who has consistently attracted ratings above 7 million and has been credited with reviving BBC1's Saturday night fortunes. Executives at Network Centre are hoping that this show will have a similar attraction for audiences.

One source told The Stage: "The team of five is lead by Professor Cutter. You learn through flashbacks that his wife disappeared when she was investigating these black holes and he is determined to find her. The black holes can open up anywhere. In the first episode the team find their way through to a world at the time of the dinosaurs.

"In another they discover a hole in the flooded bathroom of a domestic house, which leads them to an underwater world full of prehistoric sea monsters. There is even an episode set in the depths of the tube, where the group face giant arachnids. There is a race against time to find out what they need to before the black hole closes and they are trapped."

The series will feature the latest CGI graphics and is being made by Impossible Pictures, the indie that made BBC1 history hits Walking With Dinosaurs and Walking With Beasts. It has been written by Adrian Hodges, who has also scripted television adaptations such as David Copperfield, Lorna Doone and Charles II. The insider said: "It is a bit of a coup getting Adrian, as he has been a writer under contract with the BBC for a long time."

Doctor Who swept the board at this year's National Television Awards and has prompted the Corporation to invest in other high-profile family dramas. New adaptations tackling the legends of Merlin and Robin Hood have been commissioned, with BBC controller of drama Jane Tranter promising more of the genre early on weekend evenings and on bank holidays.

While the source said Primaeval was perfect for an early evening slot, they said the network was still undecided whether it would be broadcast on a Saturday or a Sunday but revealed there are more dramas suitable for all the family in the pipeline.

ITV1 has come under fire for the quality of its programming and reliance on reality shows. However, in recent months extra cash has been made available for investment in programming, following the move by industry watchdog Ofcom to slash the network's annual licence payments by £135 million.

Caption: Battle lines —Rufus Sewell in Charles II — The Power and the Passion, written by Adrian Hodges for the BBC, and (inset) K9 from Doctor Who