I don't regret leaving The Street 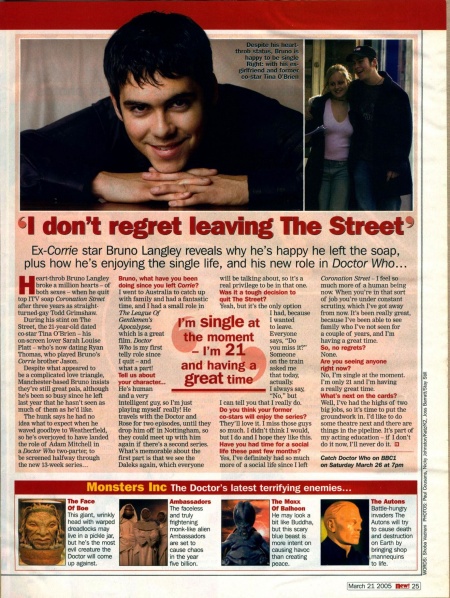 Ex-Corrie star Bruno Langley reveals why he's happy he left the soap, plus how he's enjoying the single life, and his new role in Doctor Who...

Despite what appeared to be a complicated love triangle, Manchester-based Bruno insists they're still great pals, although he's been so busy since he left last year that he hasn't seen as much of them as he'd like.

The hunk says he had no idea what to expect when he waved goodbye to Weatherfield, so he's overjoyed to have landed the role of Adam Mitchell in a Doctor Who two-parter, to be screened halfway through the new 13-week series...

Bruno, what have you been doing since you left Corrie? I went to Australia to catch up with family and had a fantastic time, and I had a small role in The League Of Gentlemen's Apocalypse, which is a great film. Doctor Who is my first telly role since I quit - and what a part! Tell us about your character... He's human and a very intelligent guy, so I'm just playing myself really! He travels with the Doctor and Rose for two episodes, until they drop him off in Nottingham, so they could meet up with him again if there's a second series. What's memorable about the first part is that we see the Daleks again, which everyone will be talking about, so it's a real privilege to be in that one. Was it a tough decision to quit The Street?

Yeah, but it's the only option I had, because I wanted to leave. Everyone says, "Do you miss it?" Someone on the train asked me that today, actually. I always say,

"No," but I can tell you that I really do. Do you think your former co-stars will enjoy the series? They'll love it. I miss those guys so much. I didn't think I would, but I do and I hope they like this. Have you had time for a social life these past few months? Yes, I've definitely had so much more of a social life since I left

Coronation Street - I feel so much more of a human being now. When you're in that sort of job you're under constant scrutiny, which I've got away from now. It's been really great, because I've been able to see family who I've not seen for a couple of years, and I'm having a great time.

Are you seeing anyone right now?

No, I'm single at the moment. I'm only 21 and I'm having a really great time.

What's next on the cards? Well, I've had the highs of two big jobs, so it's time to put the groundwork in. I'd like to do some theatre next and there are things in the pipeline. It's part of my acting education - if I don't do it now, I'll never do it. al

Catch Doctor Who on BBC1 on Saturday March 26 at 7pm

Caption: Despite his heartthrob status. Bruno is happy to be single Right: with his ex-girlfriend and former co-star Tina O'Brien

The Face Of Boe

This giant, wrinkly head with warped dreadlocks may live in a pickle jar, but he's the most evil creature the Doctor will come up against.

The faceless and truly frightening monk-like alien Ambassadors are set to cause chaos in the year five billion.

He may look a bit like Buddha, but this scary blue beast is more intent on causing havoc than creating peace.

Battle-hungry invaders The Autons will try to cause death and destruction on Earth by bringing shop mannequins to life.