I fear future as the Timelord, admits Dr Who 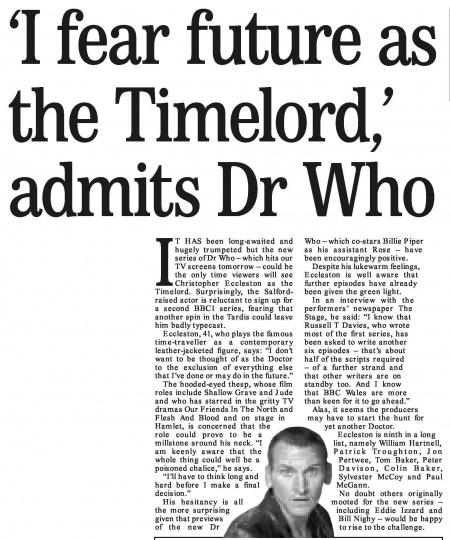 IT HAS been long-awaited and hugely trumpeted but the new series of Dr Who—which hits our TV screens tomorrow — could be the only time viewers will see Christopher Eccleston as the Timelord. Surprisingly, the Salford-raised actor is reluctant to sign up for a second BBC1 series, fearing that another spin in the Tardis could leave him badly typecast.

Eccleston, 41, who plays the famous time-traveller as a contemporary leather-jacketed figure, says: "I don't want to be thought of as the Doctor to the exclusion of everything else that I've done or may do in the future."

The hooded-eyed thesp, whose film roles include Shallow Grave and Jude and who has starred in the gritty TV dramas Our Friends In The North and Flesh And Blood and on stage in Hamlet, is concerned that the role could prove to be a millstone around his neck. "I am keenly aware that the whole thing could well be a poisoned chalice," he says.

"I'll have to think long and hard before I make a final decision."

His hesitancy is all the more surprising given that previews of the new Dr Who —which co-stars Billie Piper as his assistant Rose — have been encouragingly positive.

Despite his lukewarm feelings, Eccleston is well aware that further episodes have already been given the green light.

In an interview with the performers' newspaper The Stage, he said: "I know that Russell T Davies, who wrote most of the first series, has been asked to write another six episodes — that's about half of the scripts required — of a further strand and that other writers are on standby too. And I know that BBC Wales are more than keen for it to go ahead."

Alas, it seems the producers may have to start the hunt for yet another Doctor. Eccleston is ninth in a long list, namely William Hartnell, Patrick Troughton, Jon Pertwee, Tom Baker, Peter Davison, Colin Baker, Sylvester McCoy and Paul McGann.