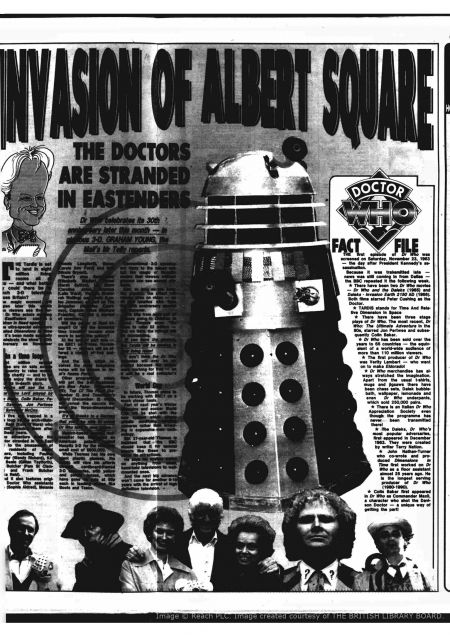 The first episode of Dr Who was screened on Saturday, November 23, 1963 — the day after President Kennedy's assassination.

Because it was transmitted late - news was still coming in from Dallas — the BBC repeated it the following week.

★ TARDIS stands for Time And Relative Dimension In Space

★ There have been three stage plays of Dr Who. The most recent, Dr Who: The Ultimate Adventure in the 80s, starred Jon Pertwee and subsequently Colin Baker.

★ Dr Who has been sold over the years to 65 countries — the equivalent of a world-wide audience of more than 110 million viewers.

★ The first producer of Dr Who was Verity Lambert — who went on to make Eldorado!

★ Dr Who merchandise has always stretched the imagination. Apart from the usual t-shirts, mugs and jigsaws there have been chess sets, Dalek bubble-bath, wallpaper, lemonade and even Dr Who underpants, which sold 250,000 pairs.

★ There is an Italian Dr Who Appreciation Society even though the programme has never been transmitted there!

★ The Daleks, Dr Who's most popular adversaries, first appeared in December 1963. They were created by writer Terry Nation.

★ John Nathan-Tumor who co-wrote and produced Dimensions in Time first worked on Dr Who as a floor assistant almost 25 years ago. He is the longest serving producer of Dr Who (1980-1990).

★ Colin Baker first appeared in Dr Who as Commander Maxil, a character who shot the Davison Doctor — a unique way of getting the part.