Is it wrong to enjoy outdated, unwoke TV shows? No. Don't write off the culture of the past — context is key 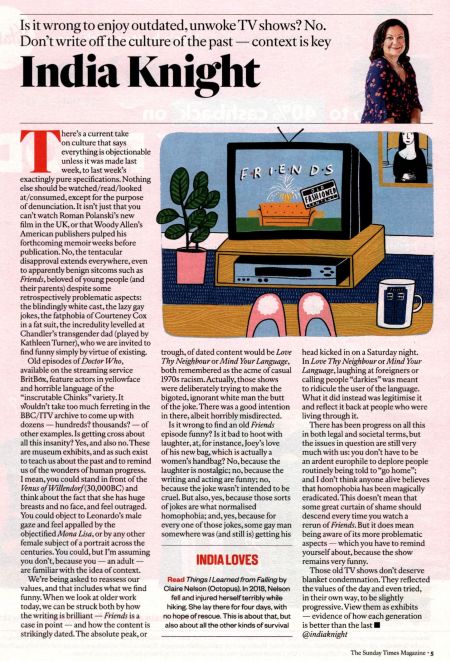 There's a current take on culture that says everything is objectionable unless it was made last week, to last week's exactingly pure specifications. Nothing else should be watched/read/looked at/consumed, except for the purpose of denunciation. It isn't just that you can't watch Roman Polanski's new film in the UK, or that Woody Allen's American publishers pulped his forthcoming memoir weeks before publication. No, the tentacular disapproval extends everywhere, even to apparently benign sitcoms such as Friends, beloved of young people (and their parents) despite some retrospectively problematic aspects: the blindingly white cast, the lazy gay jokes, the fatphobia of Courteney Cox in a fat suit, the incredulity levelled at Chandler's transgender dad (played by Kathleen Turner), who we are invited to find funny simply by virtue of existing.

Old episodes of Doctor Who, available on the streaming service BritBox, feature actors in yellowface and horrible language of the "inscrutable Chinks" variety. It wouldn't take too much ferreting in the BBC/ITV archive to come up with dozens — hundreds? thousands? — of other examples. Is getting cross about all this insanity? Yes, and also no. These are museum exhibits, and as such exist to teach us about the past and to remind us of the wonders of human progress. I mean, you could stand in front of the Venus of Willendorf (30,000BC) and think about the fact that she has huge breasts and no face, and feel outraged. You could object to Leonardo's male gaze and feel appalled by the objectified Mona Lisa, or by any other female subject of a portrait across the centuries. You could, but I'm assuming you don't, because you — an adult — are familiar with the idea of context.

We're being asked to reassess our values, and that includes what we find funny. When we look at older work today, we can be struck both by how the writing is brilliant — Friends is a case in point — and how the content is strikingly dated. The absolute peak, or trough, of dated content would be Love Thy Neighbour or Mind Your Language, both remembered as the acme of casual 1970s racism. Actually, those shows were deliberately trying to make the bigoted, ignorant white man the butt of the joke. There was a good intention in there, albeit horribly misdirected.

Is it wrong to find an old Friends episode funny? Is it bad to hoot with laughter, at, for instance, Joey's love of his new bag, which is actually a women's handbag? No, because the laughter is nostalgic; no, because the writing and acting are funny; no, because the joke wasn't intended to be cruel. But also, yes, because those sorts of jokes are what normalised homophobia; and, yes, because for every one of those jokes, some gay man somewhere was (and still is) getting his head kicked in on a Saturday night. In Love Thy Neighbour or Mind Your Language, laughing at foreigners or calling people "darkies" was meant to ridicule the user of the language. What it did instead was legitimise it and reflect it back at people who were living through it.

There has been progress on all this in both legal and societal terms, but the issues in question are still very much with us: you don't have to be an ardent europhile to deplore people routinely being told to "go home"; and I don't think anyone alive believes that homophobia has been magically eradicated. This doesn't mean that some great curtain of shame should descend every time you watch a rerun of Friends. But it does mean being aware of its more problematic aspects — which you have to remind yourself about, because the show remains very funny.

Those old TV shows don't deserve blanket condemnation. They reflected the values of the day and even tried, in their own way, to be slightly progressive. View them as exhibits — evidence of how each generation is better than the last