Is there a collective noun for Doctor Who zealots? 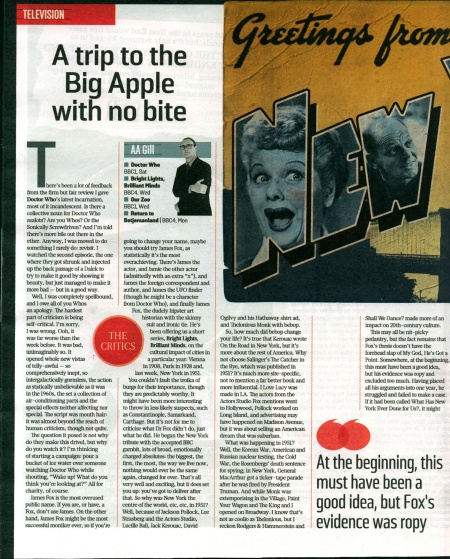 A trip to the Big Apple with no bite

There's been a lot of feedback from the firm but fair review I gave Doctor Who's latest incarnation, most of it incandescent. Is there a collective noun for Doctor Who zealots? Are you Whos? Or the Sonically Screwdriven? And I'm told there's more bile out there in the ether. Anyway, I was moved to do something I rarely do: revisit. I watched the second episode, the one where they got shrunk and injected up the back passage of a Dalek to try to make it good by showing it beauty, but just managed to make it more bad — but in a good way.

Well, I was completely spellbound, and I owe all of you Whos an apology. The hardest part of criticism is being self-critical. I'm sorry, I was wrong. Ooh, it was far worse than the week before. It was bad, unimaginably so. It opened whole new vistas of telly-awful — so comprehensively inept, so intergalactically gormless, the action as statically unbelievable as it was in the 1960s, the set a collection of air-conditioning parts and the special effects neither affecting nor special. The script was mouth hair: it was almost beyond the reach of human criticism, though not quite.

The question it posed is not why do they make this drivel, but why do you watch it? I'm thinking of starting a campaign: pour a bucket of ice water over someone watching Doctor Who while shouting, "Wake up! What do you think you're looking at?" All for charity, of course.

James Fox is the most overused public name. If you are, or have, a Fox, don't use James. On the other hand, James Fox might be the most successful moniker ever, so if you're going to change your name, maybe you should try James Fox, as statistically it's the most overachieving. There's James the actor, and Jamie the other actor (admittedly with an extra "x"), and James the foreign correspondent and author, and James the UFO finder (though he might be a character from Doctor Who), and funny James Fox, the dudely hipster art historian with the skinny suit and ironic tie. He's been offering us a short series, Bright Lights, Brilliant Minds ...