It's Anything But Down To Earth 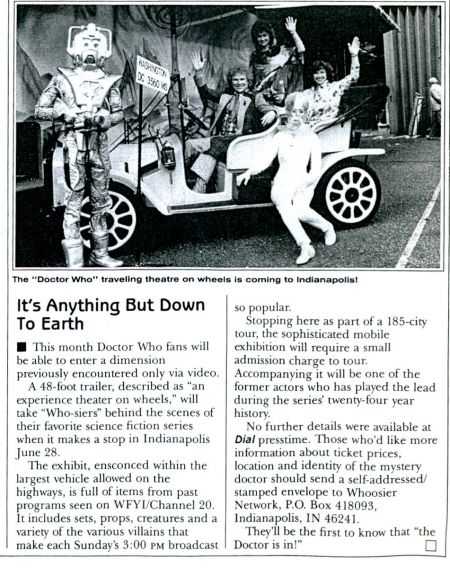 This month Doctor Who fans will be able to enter a dimension previously encountered only via video.

A 48-foot trailer, described as "an experience theater on wheels," will take "Who-siers" behind the scenes of their favorite science fiction series when it makes a stop in Indianapolis June 28.

The exhibit, ensconced within the largest vehicle allowed on the highways, is full of items from past programs seen on WFYI/Channel 20. It includes sets, props, creatures and a variety of the various villains that make each Sunday's 3:00 PM broadcast so popular.

Stopping here as part of a 185-city tour, the sophisticated mobile exhibition will require a small admission charge to tour. Accompanying it will be one of the former actors who has played the lead during the series' twenty-four year history.

No further details were available at Dial presstime. Those who'd like more information about ticket prices, location and identity of the mystery doctor should send a self-addressed/ stamped envelope to Whoosier Network, P.O. Box 418093, Indianapolis, IN 46241.

They'll be the first to know that "the Doctor is in!"

Caption: The "Doctor Who" traveling theatre on wheels is coming to Indianapolis!