It's Doctor Who v Sherlock! 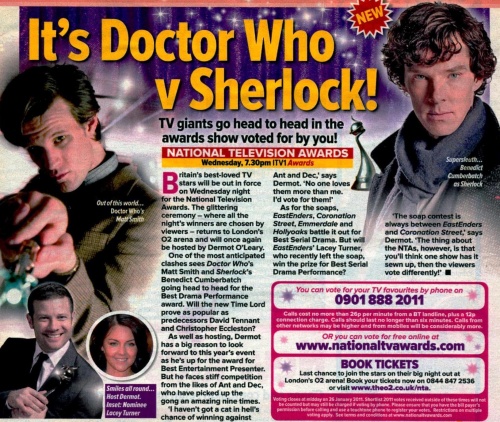 TV giants go head to head in the awards show voted for by you!

Britain's best-loved TV stars will be out in force on Wednesday night for the National Television Awards. The glittering ceremony — where all the night's winners are chosen by viewers — returns to London's 02 arena and will once again be hosted by Dermot O'Leary.

One of the most anticipated clashes sees Doctor Who's Matt Smith and Sherlock's Benedict Cumberbatch going head to head for the Best Drama Performance award. Will the new Time Lord prove as popular as predecessors David Tennant and Christopher Eccleston?

As well as hosting, Dermot has a big reason to look forward to this year's event as he's up for the award for Best Entertainment Presenter. But he faces stiff competition from the likes of Ant and Dec, who have picked up the gong an amazing nine times.

'I haven't got a cat in hell's chance of winning against Ant and Dec,' says Dermot. 'No one loves them more than me. I'd vote for them!'

Caption: Out of this world... Doctor Who's Matt Smith