It's Dr Who the Movie! 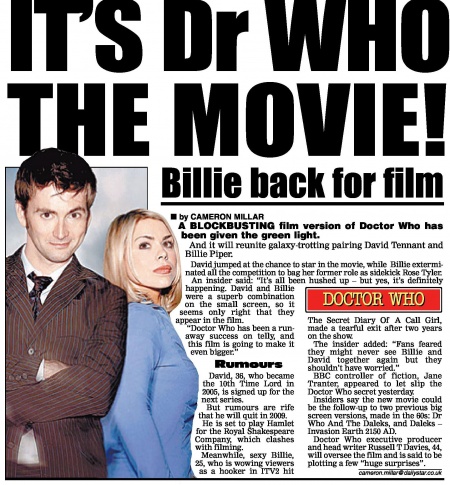 Billie back for film

A BLOCKBUSTING film version of Doctor Who has been given the green light.

And it will reunite galaxy-trotting pairing David Tennant and Billie Piper.

David jumped at the chance to star in the movie, while Billie exterminated all the competition to bag her former role as sidekick Rose Tyler. An insider said: "It's all been hushed up — but yes, it's definitely happening. David and Billie were a superb combination on the small screen, so it seems only right that they appear in the film.

"Doctor Who has been a runaway success on telly, and this film is going to make it even bigger."

But rumours are rife that he will quit in 2009. He is set to play Hamlet for the Royal Shakespeare Company, which clashes with filming.

Meanwhile, sexy Billie, 25, who is wowing viewers as a hooker in ITV2 hit The Secret Diary Of A Call Girl, made a tearful exit after two years on the show

The insider added: "Fans feared they might never see Billie and David together again but they shouldn't have worried."

Insiders say the new movie could be the follow-up to two previous big screen versions, made in the 60s: Dr Who And The Daleks, and Daleks — Invasion Earth 2150 AD.

Doctor Who executive producer and head writer Russell T Davies, 44, will oversee the film and is said to be plotting a few "huge surprises".