It's Just What the Doctor Ordered (Sandwell Evening Mail) 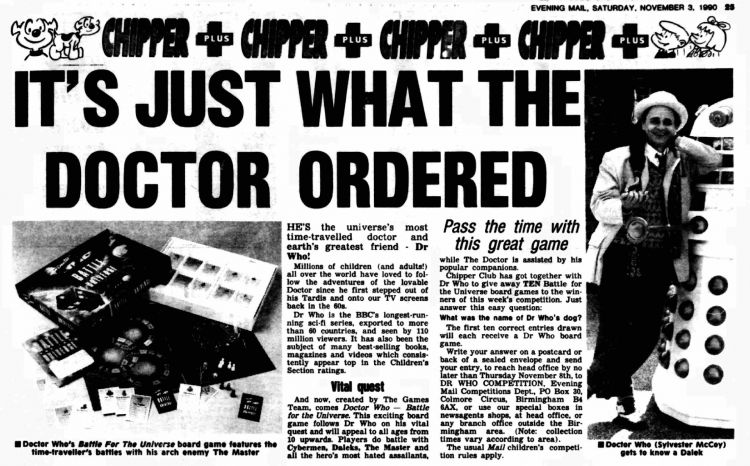 Pass the time with this great game

HE'S the universe's most time-travelled doctor and earth's greatest friend - Dr Who!

Millions of children (and adults!) all over the world have loved to follow the adventures of the lovable Doctor since he first stepped out of his Tardis and onto our TV screens back in the 60s.

Dr Who is the BBC's longest-running sci-fi series, exported to more than 60 countries, and seen by 110 million viewers. It has also been the subject of many best-selling books, magazines and videos which consistently appear top in the Children's Section ratings.

And now, created by The Games Team, comes Doctor Who -- Battle for the Universe. This exciting board game follows Dr Who on his vital quest and will appeal to all ages from 10 upwards. Players do battle with Cybermen, Daleks, The Master and all the hero's most hated assailants, while The Doctor is assisted by his popular companions.

Chipper Club has got together with Dr Who to give away TEN Battle for the Universe board games to the winners of this week's competition. Just answer this easy question:

What was the name of Dr Who's dog?

The first ten correct entries drawn will each receive a Dr Who board game. Write your answer on a postcard or back of a sealed envelope and send your entry, to reach head office by no later than Thursday November 8th, to DR WHO COMPETITION, Evening Mail Competitions Dept., PO Box 30, Colmore Circus, Birmingham B4 6AX, or use our special boxes in newsagents shops, at head office, or any branch office outside the Birmingham area. (Note: collection times vary according to area).

Caption: Doctor Who (Sylvester McCoy) gets to know a Dalek