It's Monsters for the little horrors! 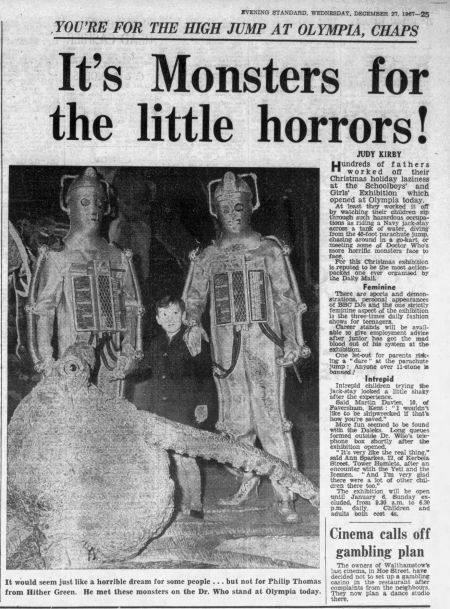 YOU'RE FOR THE HIGH JUMP AT OLYMPIA, CHAPS

Hundreds of fathers worked off their Christmas holiday laziness at the Schoolboys' and Girls' Exhibition which opened at Olympia today.

At least they worked it off by watching their children zip through such hazardous occupations as riding a Navy jack-stay across a tank of water, diving from the 40-foot parachute jump, chasing around in a go-kart, or meeting some of Doctor Who's more horrific monsters face to face.

For this Christmas exhibition is reputed to be the most action-packed one ever organised by the Daily Mail.

There are sports and demonstrations, personal appearances of BBC DJs and the one strictly feminine aspect of the exhibition is the three-times daily fashion shows for teenagers.

Career stands will be available to give employment advice after junior has got the mad blood out of his system at the exhibition.

One let-out for parents risking a "dare" at the parachute jump : Anyone over 11-stone is banned!

Intrepid children trying the jack-stay looked a little shaky after the experience.

Said Martin Davies, 10, of Faversham, Kent: "I wouldn't like to be shipwrecked if that's how you're saved."

More fun seemed to be found with the Daleks. Long queues formed outside Dr. Who's telephone box shortly after the exhibition opened.

"It's very like the real thing." said Ann Sparkes, 12, of Kerbela Street, Tower Hamlets, after an encounter with the Yeti and the Icemen. " And I'm very glad there were a lot of other children there too."

Caption: It would seem just like a horrible dream for some people ... but not for Philip Thomas from Hither Green. He met these monsters on the Dr. Who stand at Olympia today.