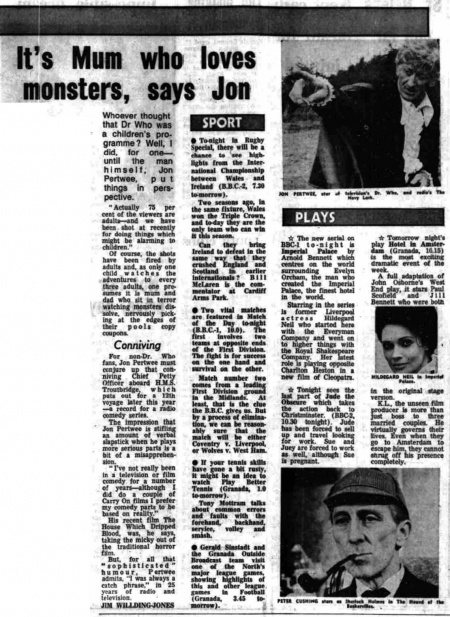 Whoever thought that Dr Who was a children's programme? Well, I did, for one—until the man himself, Jon Pertwee, put things in perspective.

"Actually 73 per cent of the viewers are adults--and we have been shot at recently for doing things which might be alarming to children."

Of course, the shots have been fired by adults and, as only one child watches the adventure, to every three adults, one presumes it is mum and dad who sit in terror watching monsters dissolve, nervously picking at the edges of their pools copy coupons.

For non-Dr. Who fans, Jon Pertwee must conjure up that conniving Chief Petty Officer aboard H.M.S. Troutbridge, which puts out for a 12th voyage later this year — a record for a radio comedy series.

The impression that Jon Pertwee is stifling an amount of verbal slapstick when he plays more serious parts is a bit of a misapprehension.

"I've not really been in a television of film comedy for a number of years—although I did do a couple of Carry On films I prefer my comedy parts to be based on reality."

His recent film The House Which Dripped Blood, was, he says, taking the micky out of the traditional horror film.

But, for all that "sophisticated" humour, Pertwee admits, "I was always a catch phrase," in 25 years of radio and television.