It's a UFO Boyo 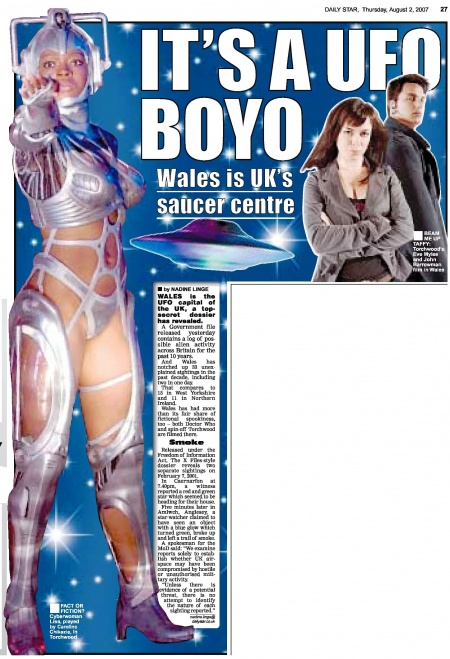 WALES is the UFO capital of the UK, a top-secret dossier has revealed.

A Government file released yesterday contains a log of possible alien activity across Britain for the past 10 years.

And Wales has notched up 33 unexplained sightings in the past decade, including two in one day.

That compares to 15 in West Yorkshire and 11 in Northern Ireland.

Wales has had more than its fair share of fictional spookiness, too — both Doctor Who and spin-off Torchwood are filmed there.

In Caernarfon at 7.40pm, a witness reported a red and green star which seemed to be heading for their house. Five minutes later in Amlwch, Anglesey, a star-watcher claimed to have seen an object with a blue glow which turned green, broke up and left a trail of smoke. A spokesman for the MoD said: "We examine reports solely to establish whether UK airspace may have been compromised by hostile or unauthorised military activity.

"Unless there is evidence of a potential threat, there is no attempt to identify the nature of each sighting reported."