It's just out of this world! 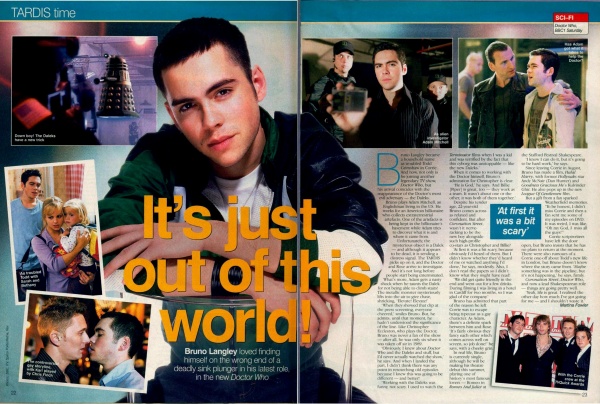 Bruno Langley loved finding himself on the wrong end of a deadly sink plunger in his latest role, in the new Doctor Who TARDIS time

Bruno Langley became a household name as troubled Todd Grimshaw in Corrie. And now, not only is he joining another legendary TV show, Doctor Who, but its arrival coincides with the reappearance of the Doctor's most evil adversary — the Daleks. Bruno plays Adam Mitchell, an Englishman living in the US. He works for an American billionaire who collects extraterrestrial artefacts. One of the artefacts is being kept in the billionaire's basement while Adam tries to discover what it is and where it came from.

Unfortunately, the mysterious object is a Dalek — and although it appears to be dead, it is sending a distress signal. The TARDIS picks up on it, and the Doctor and Rose arrive to investigate.

And it's not long before people start being exterminated. What's more, Adam gets a nasty shock when he taunts the Dalek for not being able to climb stairs! The metallic monster mysteriously lifts into the air to give chase, shrieking, 'Elevate! Elevate!' 'When they showed that clip at the press screening, everyone cheered,' smiles Bruno. But, he Omits, until that moment, he hadn't understood the significance of the line. Like Christopher Eccleston, who plays the Doctor, Bruno was never a fan of the show — after all, he was only six when it was taken off air in 1989.

'Obviously, I knew about Doctor Who and the Daleks and stuff, but I'd never actually watched the show,' he says. And when I landed the )art, I didn't think there was any point in researching old episodes because I knew this was going to be different — and better!

Working with the Daleks was funny, not scary. I used to watch the Terminator films when I was a kid and was terrified by the fact that this cyborg was unstoppable — like the new Daleks.'

When it comes to working with the Doctor himself, Bruno's admiration for Christopher is clear.

'He is God,' he says. And Billie [Piper] is great, too — they work as a team. It wasn't about one or the other, it was both of them together.'

Despite his tender age, 22-year-old Bruno comes across as relaxed and confident. But after Coronation Street, wasn't it nerve-racking to be the new boy alongside such high-profile co-stars as Christopher and Billie?

'At first it was a bit scary, because obviously I'd heard of them. But I didn't know whether they'd heard of me or watched anything I'd done,' he says, modestly. Also, I don't read the papers so I didn't know what they might have read!

'We did get quite friendly in the end and went out for a few drinks. During filming I was living in a hotel in Cardiff for two months, so I was glad of the company.'

Bruno has admitted that part of the reason he left Corrie was to escape being typecast as a gay character. As Adam, there's a definite spark between him and Rose. 'It's fairly obvious they fancy each other which comes across well on screen, so job done!' h says, with a cheeky grin.

In real life, Bruno is currently single, although he will be making his theatre debut this summer, playing one of history's most famous lovers — Romeo in Romeo And Juliet at the Stafford Festival Shakespeare. 'I know I can do it, but it's going to be hard work,' he says.

Since leaving Corrie in August, Bruno has made a film, Halal Harry, with former Hollyoaks star Andy McNair (Dan Hunter) and Goodness Gracious Me's Kulvinder Ghir. He also pops up in the new League Of Gentlemen film.

But a gift from a fan sparked Weatherfield memories. 'To be honest, I didn't miss Corrie and then a fan sent me some of my episodes on DVD. It was weird, I was like, "Oh my God, I miss all the guys!"

Corrie scriptwriters have left the door open, but Bruno insists that he has no plans to return at the moment. There were also rumours of a Corrie one-off about Todd's new life in London, but Bruno doesn't know where the story came from. 'Maybe something was in the pipeline, but it's not happening,' he says, firmly.

'Yeah, life is great. I realised the other day how much I've got going for me — and I shouldn't waste it.'

Down boy! The Daleks have a new trick

The controversial gay storyline, with Karl played by Chris Finch

Has Adam got what it takes to help the Doctor?