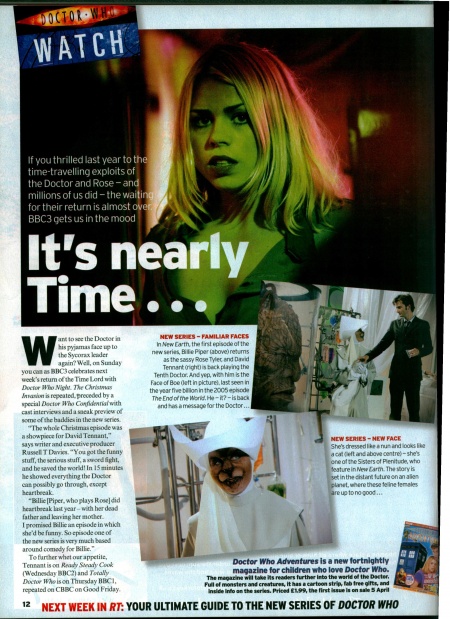 If you thrilled last year to the time-travelling exploits of the Doctor and Rose — and millions of us did — the waiting for their return is almost over. BBC3 gets us in the mood

Want to see the Doctor in his pyjamas face up to the Sycorax leader again? Well, on Sunday you can as BBC3 celebrates next week's return of the Time Lord with Doctor Who Night. The Christmas Invasion is repeated, preceded by a special Doctor Who Confidential with cast interviews and a sneak preview of some of the baddies in the new series.

"The whole Christmas episode was a showpiece for David Tennant," says writer and executive producer Russell T Davies. "You got the funny stuff, the serious stuff, a sword fight, and he saved the world! In 15 minutes he showed everything the Doctor can possibly go through, except heartbreak.

"Billie [Piper, who plays Rose] did heartbreak last year - with her dead father and leaving her mother. I promised Billie an episode in which she'd be funny. So episode one of the new series is very much based around comedy for Billie."

To further whet our appetite, Tennant is on Ready Steady Cook (Wednesday BBC2) and Totally Doctor Who is on Thursday BBC1, repeated on CBBC on Good Friday.

NEW SERIES — FAMILIAR FACES In New Earth, the first episode of the new series, Billie Piper (above) returns as the sassy Rose Tyler, and David Tennant (right) is back playing the Tenth Doctor. And yep, with him is the Face of Boe (left in picture), last seen in the year five billion in the 2005 episode The End of the World. He — it? — is back and has a message for the Doctor...

NEW SERIES — NEW FACE She's dressed like a nun and looks like a cat (left and above centre) — she's one of the Sisters of Plenitude, who feature in New Earth. The story is set in the distant future on an alien planet, where these feline females re up to no good ...

Doctor Who Adventures is a new fortnightly magazine for children who love Doctor Who.

The magazine will take its readers further into the world of the Doctor. Full of monsters and creatures, it has a cartoon strip, fab free gifts, and inside info on the series. Priced £1.99, the first issue is on sale 5 April