It's the end of an era for Doctor Who 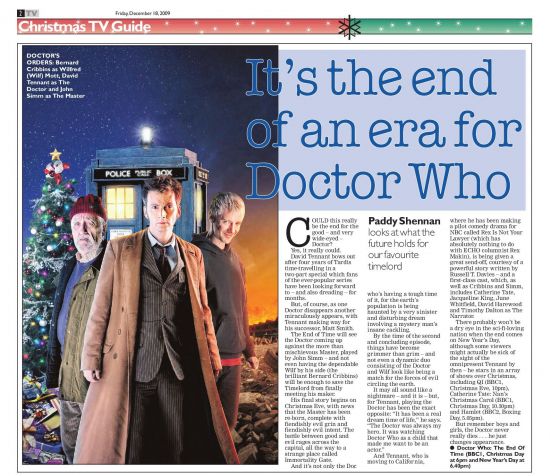 COULD this really be the end for the good - and very wide-eyed Doctor?

Yes, it really could.

David Tennant bows out after four years of Tardis time-travelling in a two-part special which fans of the ever-popular series have been looking forward to - and also dreading - for months.

But, of course, as one Doctor disappears another miraculously appears, with Tennant making way for his successor, Matt Smith.

The End of Time will see the Doctor coming up against the more than mischievous Master, played by John Simm - and not even having the dependable Wilf by his side (the brilliant Bernard Cribbins) will be enough to save the Timelord from finally meeting his maker.

His final story begins on Christmas Eve, with news that the Master has been re-born, complete with fiendishly evil grin and fiendishly evil intent. The battle between good and evil rages across the capital, all the way to a strange place called Immortality Gate.

And it's not only the Doc who's having a tough time of it, for the earth's population is being haunted by a very sinister and disturbing dream involving a mystery man's insane cackling.

By the time of the second and concluding episode, things have become grimmer than grim - and not even a dynamic duo consisting of the Doctor and Wilf look like being a match for the forces of evil circling the earth.

It may all sound like a nightmare - and it is - but, for Tennant, playing the Doctor has been the exact opposite: "It has been a real dream time of life," he says. "The Doctor was always my hero. It was watching Doctor Who as a child that made me want to be an actor."

And Tennant, who is moving to California, where he has been making a pilot comedy drama for NBC called Rex Is Not Your Lawyer (which has absolutely nothing to do with ECHO columnist Rex Makin), is being given a great send-off, courtesy of a powerful story written by Russell T. Davies - and a first-class cast, which, as well as Cribbins and Simm, includes Catherine Tate, Jacqueline King, June Whitfield, David Harewood and Timothy Dalton as The Narrator.

There probably won't be a dry eye in the sci-fi-loving nation when the end comes on New Year's Day, although some viewers might actually be sick of the sight of the

Caption: DOCTOR'S ORDERS: Bernard Cribbins as Wilfred (Wilf) Mott, David Tennant as The Doctor and John Simm as The Master