It contains gay sex and bloody violence...but never mind, let your children stay up to see Torchwood, says the BBC 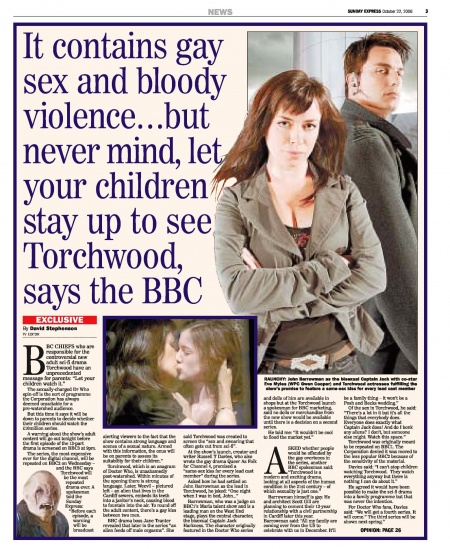 BBC CHIEFS who are responsible for the controversial new adult sci-fi drama Torchwood have an unprecedented message for parents: "Let your children watch it."

The sexually-charged Dr Who spin-off is the sort of programme the Corporation has always deemed unsuitable for a pre-watershed audience.

But this time it says it will be down to parents to decide whether their children should watch the £l0million series.

A warning about the show's adult content will go out tonight before the first episode of the 13-part drama is screened on BBC3 at 9pm.

The series, the most expensive ever for the digital channel, will be repeated on BBC2 on Wednesday and the BBC says Torchwood will be the most repeated drama ever. A spokesman told the Sunday Express: "Before each episode, a warning will be broadcast alerting viewers to the fact that the show contains strong language and scenes of a sexual nature. Armed with this information, the onus will be on parents to assess its suitability for their children."

Torchwood, which is an anagram of Doctor Who, is unashamedly post-watershed. Within minutes of the opening there is strong language. Later, Weevil - pictured left - an alien that lives in the Cardiff sewers, embeds its teeth into a janitor's neck, causing blood to fountain into the air. To round off the adult content, there's a gay kiss between two men.

BBC drama boss Jane Tranter revealed that later in the series "an alien feeds off male orgasms". She said Torchwood was created to screen the "sex and swearing that often gets cut from sci-fi".

At the show's launch, creator and writer Russell T Davies, who also wrote the gay drama Queer As Folk for Channel 4, promised a "same-sex kiss for every lead cast member" during the series.

Asked how he had settled on John Barrowman as the lead in Torchwood, he joked: "One night when I was in bed, John..."

Barrowman, who was a judge on BBC1's Maria talent show and is a leading man on the West End stage, plays the central character, the bisexual Captain Jack Harkness. The character originally featured in the Doctor Who series and dolls of him are available in shops but at the Torchwood launch a spokesman for BBC marketing, said no dolls or merchandise from the new show would be available until there is a decision on a second series.

He told me: "It wouldn't be cool to flood the market yet."

ASKED whether people would be offended by the gay overtones in the series, another BBC spokesman said: "Torchwood is a modern and exciting drama, looking at all aspects of the human condition in the 21st century - of which sexuality is just one."

Barrowman himself is gay. He and architect Scott Gill are planning to cement their 13-year relationship with a civil partnership in Cardiff later this year. Barrowman said: "All my family are coming over from the US to celebrate with us in December. It'll

be a family thing - it won't be a Posh and Becks wedding."

Of the sex in Torchwood, he said: "There's a lot in it but it's all the things that everybody does. Everyone does exactly what Captain Jack does! And do I bonk any aliens? I don't, but someone else might. Watch this space."

Torchwood was originally meant to be repeated on BBC1. The Corporation denied it was moved to the less popular BBC2 because of the sensitivity of the material.

Davies said: "I can't stop children watching Torchwood. They watch everything anyway but there is nothing I can do about it."

He agreed it would have been possible to make the sci-fi drama into a family programme but that was never the intention.

For Doctor Who fans, Davies said: "We will get a fourth series. It will come." The third series will be shown next spring."