It was a total blast 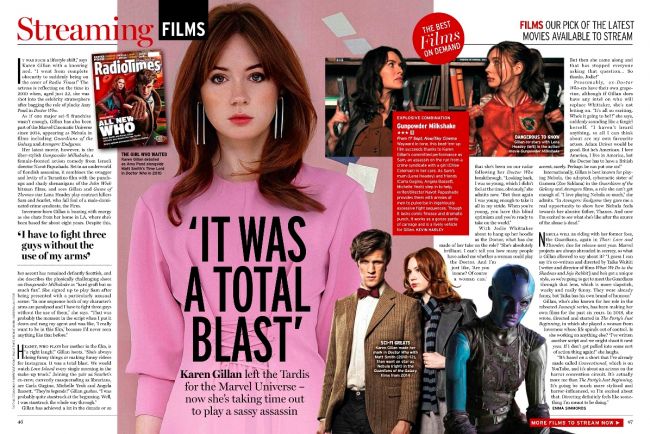 IT WAS SUCH a lifestyle shift," says Karen Gillan with a knowing nod. "I went from complete obscurity to suddenly being on the cover of Radio Times!" The actress is reflecting on the time in 2010 when, aged just 22, she was shot into the celebrity stratosphere after bagging the role of plucky Amy Pond in Doctor Who.

As if one major sci-fi franchise wasn't enough, Gillen has also been part of the Marvel Cinematic Universe since 2014, appearing as Nebula in films including Guardians of the Galaxy and Avengers: Endgame.

Her latest movie, however, is the fiber-stylish Gunpowder Milkshake, a female-fronted action comedy from Israeli director Navot Papushado. Set in an underworld of fiendish assassins, it combines the swagger and levity of a Tarantino film with the punch-ups and shady shenanigans of the John Wick hitman films, and sees Gillen and Game of Thrones star Lena Headey play contract killers Sam and Scarlet, who fall foul of a male-dominated crime syndicate, the Firm.

Inverness-born Gillan is buzzing with energy as she chats from her home in LA, where she's been based for about eight years. Despite this, her accent has remained defiantly Scottish, and she describes the physically challenging shoot on Gunpowder Milkshake as "hard graft but so much fun". She signed up to play Sam after being presented with a particularly unusual scene: "In one sequence both of my character's g arms are paralysed and I have to fight flute guys without the use of them," she says. "That was probably the moment in the script when I put it down and rang my agent and was like, 'I really ?. want to be in this film: because I'd never seen anything like that before."

HEADEY, WHO PLAYS her mother in the film, is "a right laugh!" Gillan hoots. "She's always doing funny things or making funny videos for Instagram. It was a total blast. We would watch Love Island every single morning in the make-up truck:' Joining the pair as Scarlet's ex-crew, currently masquerading as librarians, are Carla Gugino, Michelle Yeoh and Angela Bassett. "They're legends!" Gillan gushes. "I was probably quite starstruck at the beginning. Well, I was starstruck the whole way through."

Gillan has achieved a lot in the decade or so that she's been on our radar following her Doctor Who breakthrough. "Looking back, I was so young, which I didn't feel at the time, obviously," she admits now. "But then again I was young enough to take it all in my stride. When you're young, you have this blind optimism and you're ready to take on the world."

With Jodie Whittaker about to hang up her hoodie as the Doctor, what has she made of her take on the role? "She's absolutely brilliant. I can't tell you how many people have asked me whether a woman could play the Doctor. And I'm just like, Are you insane? Of course a woman can.'

But then she came along and that has stopped everyone asking that question... So thanks, Jodie!"

Presumably, ex-Doctor Who-ers have their own grapevine, although if Gillan does have any intel on who will replace Whittaker, she's not letting on. "It's all so exciting. Who's it going to be?!" she says, suddenly sounding like a fangirl herself. "I haven't heard anything, so all I can think about are my own favourite actors. Adam Driver would be good. But he's American. I love America, I live in America, but the Doctor has to have a British accent, surely. Perhaps he can put one on!" Internationally, Galan is best known for playing Nebula, the adopted, cybernetic sister of Gamora (Zoe Saldana) in the Guardians of the Galaxy and Avengers films, a role she can't get enough of "I love playing Nebula so much," she admits. "In Avengers: Endgame they gave me a real opportunity to show how Nebula feels towards her abusive father, Thanos. And now Pm excited to see what she's like after the source of the abuse is dead:'

NEBULA WILL BE riding with her former foes, the Guardians, again in Thor: Love and Thunder, due for release next year. Marvel projects are always shrouded in secrecy, so what is Gillan allowed to say about it? "I guess I can say it's co-written and directed by Mika Waititi [writer and director of films What We Do in the Shadows and Jojo Rabbit] and he's got a unique style, so we're going to get to meet the Guardians through that lens, which is more slapstick, wacky and really funny. They were already funny, but Taika has his own brand of humour." Gillan, who's also known for her role in the rebooted Jumanji series, has been making her own films for the past six years. In 2018, she wrote, directed and starred in The Party's Just Beginning, in which she played a woman from Inverness whose life spirals out of control. Is she working on anything else? "I've written another script and we might shoot it next year. If I don't get pulled into some sort of action thing again!" she laughs.

"It's based on a short that I've already made called Conventional, which is on YouTube, and it's about an actress on the horror convention circuit. It's actually more me than The Party's Just Beginning. It's going be much more stylised and horror-influenced, so I'm excited about that. Directing definitely feels like something I'm meant to be doing."

SCI-FI GREATS Karen Gillan made her mark in Doctor Who with Matt Smith (2010-12), then went on star as Nebula (right) in the Guardians of the Galaxy films from 2014

Wayward in tone, this beat'em-up film succeeds thanks to Karen Gillan's committed performance as Sam, an assassin on the run from a crime syndicate with a girl (Chloe Coleman) in her care. As Sam's mum (Lena Headey) and friends (Carla Gugino, Angela Bassett, Michelle Yeoh) step in to help, writer/director Navot Papushado provides them with armies of men to pulverise in ingeniously excessive fight sequences. Though it lacks comic finesse and dramatic punch, it works as a gonzo panto of carnage and is a lively vehicle for Gillan.