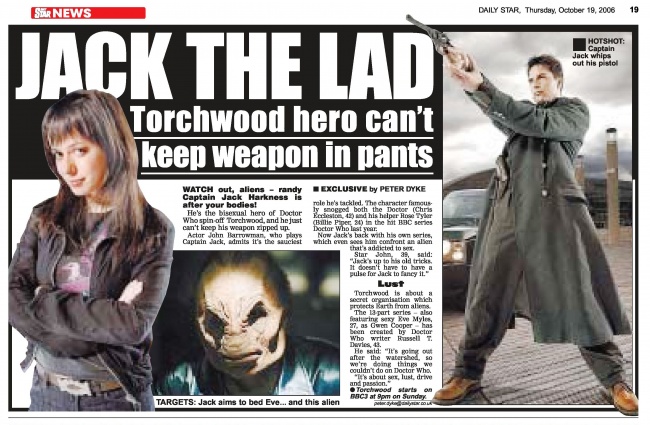 WATCH out, aliens - randy Captain Jack Harkness is after your bodies!

He's the bisexual hero of Doctor Who spin-off Torchwood, and he just can't keep his weapon zipped up. Actor John Barrowman, who plays Captain Jack, admits it's the sauciest role he's tackled. The character famously snogged both the Doctor (Chris Eccleston, 42) and his helper Rose Tyler (Billie Piper, 24) in the hit BBC series Doctor Who last year.

Now Jack's back with his own series, which even sees him confront an alien that's addicted to sex.

Torchwood is about a secret organisation which protects Earth from aliens.

He said: "It's going out after the watershed, so we're doing things we couldn't do on Doctor Who.

"It's about sex, lust, drive and passion."

Torchwood starts on BBC3 at 9pm on Sunday.

Caption: TARGETS: Jack aims to bed Eve... and this alien