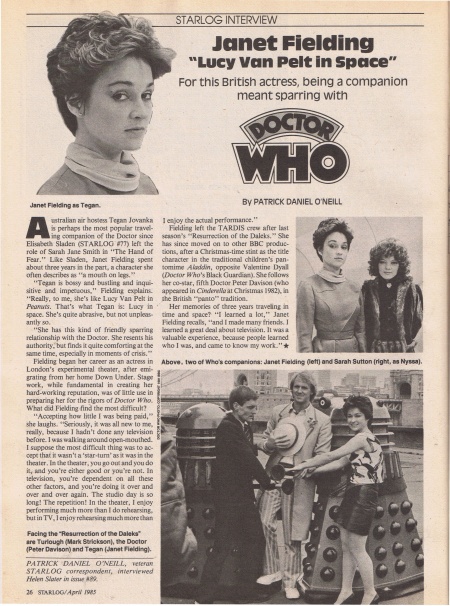 For this British actress, being a companion meant sparring with Doctor Who

Australian air hostess Tegan Jovanka is perhaps the most popular traveling companion of the Doctor since Elisabeth Sladen (STARLOG #77) left the role of Sarah Jane Smith in "The Hand of Fear." Like Sladen, Janet Fielding spent about three years in the part, a character she often describes as "a mouth on legs."

"Tegan is bossy and bustling and inquisitive and impetuous," Fielding explains. "Really, to me, she's like Lucy Van Pelt in Peanuts. That's what Tegan is: Lucy in space. She's quite abrasive, but not unpleasantly so.

"She has this kind of friendly sparring relationship with the Doctor. She resents his authority, but finds it quite comforting at the same time, especially in moments of crisis."

Fielding began her career as an actress in London's experimental theater, after emigrating from her home Down Under. Stage work, while fundamental in creating her hard-working reputation, was of little use in preparing her for the rigors of Doctor Who. What did Fielding find the most difficult?

"Accepting how little I was being paid," she laughs. "Seriously, it was all new to me, really, because I hadn't done any television before. I was walking around open-mouthed. I suppose the most difficult thing was to accept that it wasn't a 'star-turn' as it was in the theater. In the theater, you go out and you do it, and you're either good or you're not. In television, you're dependent on all these other factors, and you're doing it over and over and over again. The studio day is so long! The repetition! In the theater, I enjoy performing much more than I do rehearsing, but in TV, I enjoy rehearsing much more than I enjoy the actual performance."

Fielding left the TARDIS crew after last season's "Resurrection of the Daleks." She has since moved on to other BBC productions, after a Christmas-time stint as the title character in the traditional children's pantomime Aladdin, opposite Valentine Dyall (Doctor Who's Black Guardian). She follows her co-star, fifth Doctor Peter Davison (who appeared in Cinderella at Christmas 1982), in the British "panto" tradition.

Her memories of three years traveling in time and space? "I learned a lot," Janet Fielding recalls, "and I made many friends. I learned a great deal about television. It was a valuable experience, because people learned who I was, and came to know my work."

Above, two of Who's companions: Janet Fielding (left) and Sarah Sutton (right, as Nyssa).

Facing the "Resurrection of the Daleks" are Turlough (Mark Strickson), the Doctor (Peter Davison) and Tegan (Janet Fielding).