Janet jumped to it 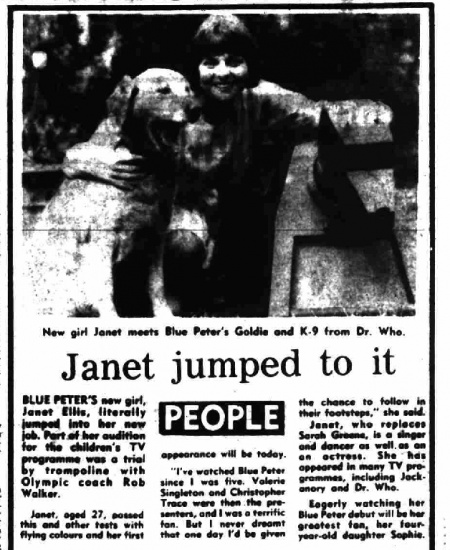 BLUE PETER's new girl, Janet Ellis, literally jumped into her new job. Part of her audition for the children's TV programme was a trial by trampoline with Olympic coach Rob Walker.

Janet, aged 26, passed this and other tests with flying colours and her first appearance will be today.

"I've watched Blue Peter since I was five. Valerie Singleton and Christopher Trace were then the presenters, and I was a terrific fan. But I never dreamt that one day I'd be given the chance to follow in their footsteps," she said.

Janet, who replaces Sarah Greene, is a singer and dancer as well as an actress. She has appeared in many TV programmes, including Jackanory and Dr. Who.

Eagerly watching her Blue Peter debut will be her greatest fan, her four-year-old daughter Sophie.