Jenna Coleman Checks Out Of Doctor Who 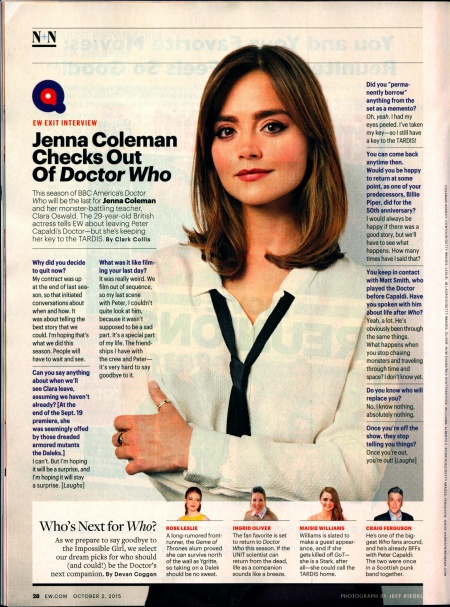 This season of BBC America's Doctor Who will be the last for Jenna Coleman and her monster-battling teacher, Clara Oswald. The 29-year-old British actress tells EW about leaving Peter Capaldi's Doctor—but she's keeping her key to the TARDIS.

Why did you decide to quit now?

My contract was up at the end of last season, so that initiated conversations about when and how. It was about telling the best story that we could. I'm hoping that's what we did this season. People will have to wait and see.

Can you say anything about when we'll see Clara leave, assuming we haven't already? [At the end of the Sept.19 premiere, she was seemingly offed by those dreaded armored mutants the Daleks.]

It was really weird. We film out of sequence, so my last scene with Peter, I couldn't quite look at him, because it wasn't supposed to be a sad part. It's a special part of my life. The friendships I have with the crew and Peter—it's very hard to say goodbye to it.

Did you "permanently borrow" anything from the set as a memento?

Oh, yeah. I had my eyes peeled. I've taken my key—so I still have a key to the TARDIS!

You can come back anytime then. Would you be happy to return at some point, as one of your predecessors, Billie Piper, did for the 50th anniversary?

I would always be happy if there was a good story, but we'll have to see what happens. How many times have I said that?

You keep in contact with Matt Smith, who played the Doctor before Capaldi. Have you spoken with him about life after Who?

Yeah, a lot. He's obviously been through the same things. What happens when you stop chasing monsters and traveling through time and space? I don't know yet.

Do you know who will replace you?

No, I know nothing, absolutely nothing.

Who's Next for Who?

As we prepare to say goodbye to the Impossible Girl, we select our dream picks for who should (and could!) be the Doctor's next companion. By Devan Coggan

A long-rumored frontrunner, the Game of Thrones alum proved she can survive north of the wall as Ygritte, so taking on a Dalek should be no sweat.

The fan favorite is set to return to Doctor Who this season. If the UNIT scientist can return from the dead, life as a companion sounds like a breeze.

Williams is slated to make a guest appearance, and if she gets killed off GoT—she is a Stark, after all—she could call the TARDIS home.

He's one of the biggest Who fans around, and he's already BFFs with Peter Capaldi: The two were once in a Scottish punk band together.