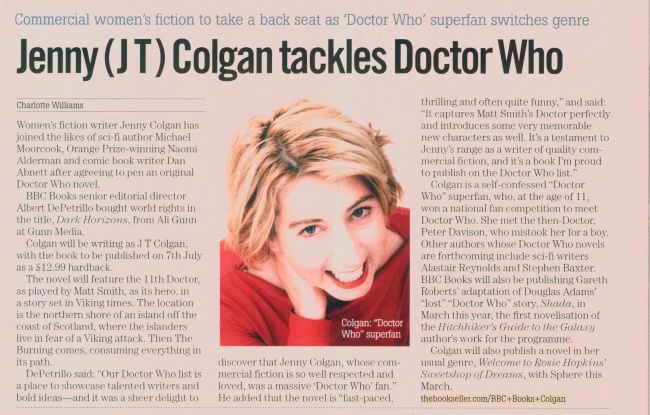 Colgan will be writing as J T Colgan, with the book to be published on 7th July as a £12.99 hardback.

The novel will feature the 11th Doctor, as played by Matt Smith, as its hero, in a story set in Viking times. The location is the northern shore of an island off the coast of Scotland, where the islanders live in fear of a Viking attack. Then The Burning comes, consuming everything in its path.

DePetrillo said: "Our Doctor Who list is a place to showcase talented writers and bold ideas—and it was a sheer delight to discover that Jenny Colgan, whose commercial fiction is so well respected and loved, was a massive 'Doctor Who' fan." He added that the novel is "fast-paced, thrilling and often quite funny," and said: "It captures Matt Smith's Doctor perfectly and introduces some very memorable new characters as well. It's a testament to Jenny's range as a writer of quality commercial fiction, and it's a book I'm proud to publish on the Doctor Who list."

Colgan is a self-confessed "Doctor Who" superfan, who, at the age of 11, won a national fan competition to meet Doctor Who. She met the then-Doctor, Peter Davison, who mistook her for a boy. Other authors whose Doctor Who novels are forthcoming include sci-fi writers Alastair Reynolds and Stephen Baxter. BBC Books will also be publishing Gareth Roberts' adaptation of Douglas Adams' "lost" "Doctor Who" story, Shada, in March this year, the first novelisation of the Hitchhiker's Guide to the Galaxy author's work for the programme.

Colgan will also publish a novel in her usual genre, Welcome to Rosie Hopkins' Sweetshop of Dreams, with Sphere this March.