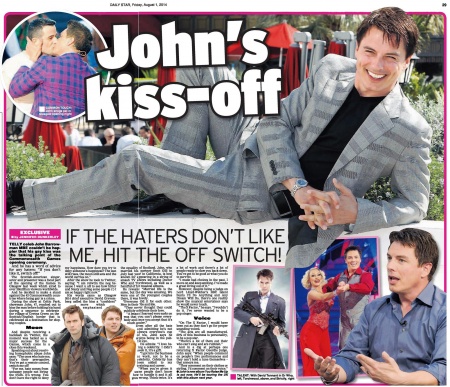 IF THE THE HATERS DON'T LIKE ME, HIT THE OFF SWITCH!

TELLY celeb John Barrowman MBE couldn't be happier that his gay kiss was the talking point of the Commonwealth Games opening ceremony.

And he has a word of advice for any haters: "If you don't like it, switch off!"

The Scottish-American singer, actor and presenter was a focal part of the opening of the Games in Glasgow last week which aired to over 20million viewers worldwide.

And he decided to make a stand against the 42 Commonwealth countries where being gay is a crime.

During the show at Celtic Park, showman John, 47, reached out to kiss the man before holding his hand during a sequence to celebrate the village of Gretna Green on the Scottish/English border that is celebrated as a destination for eloping couples.

And despite receiving a backlash on Twitter, the moment was hailed as a major success for the Games, which come to a close this weekend.

Speaking out about receiving homophobic abuse John says: "The ones who hate me, that's their prerogative. You've got a remote control, switch me off!

"For me, hate comes from unhappy people not living the truth. It's wrong. You don't have the right to deny

my happiness. How dare you try to deny someone's happiness? The sun still rises, the moon still sets and the world carries on."

After the show he took to Twitter, saying: "I am retwtin the neg because I want u all to see how bitter and Nasty and Neg some people r:) I am so happy right now."

His words came as Glasgow 2014 chief executive David Grevemberg called the kiss a "confident" move which emphasized the equality of Scotland. John, who married his partner Scott Gill in July last year in California, is best known for appearing in a string of smash TV shows including Doctor Who and Torchwood, as well as a handful of hit musical albums.

He reveals: "Married life is the same, but the day was amazing. We were one of the youngest couples there, it was lovely.

"They never thought they could publicly celebrate their love.

"A lesson I learned very early on was that 'you can't please everybody and once you accept that it's much easier."

Even after all the hate and admitting he's not always everyone's cup of tea, John says he enjoys being in the public eye.

"I got into the business to work, not to be a celebrity. Celebrity has been added to my training and career. "When you're given it some people don't know how to handle it and it all goes wrong. Think twice. It's

a lot of work and there's a lot of people ready to claw you back down. You've got to be good at what you do to survive.

"I made bad choices in the past. I move on and keep smiling. I've made a great living out of it."

However, despite being a judge on Lord Lloyd-Webber's BBC talent hunts I'd Do Anything and Any Dream Will Do, there's one reality show the musical entertainer says he would never touch.

"On The X Factor, I would have been cut as they don't go for proper sounding voices.

"The acts are all manufactured. 50% of this business is personality, to be a pop star.

"There's a lot of them out their who can't sing and are rubbish." And in a dig at perhaps one returning X Factor Geordie judge, John says: "When people comment on people's live performances and they can't hold a tune themselves that annoys me.

John's new album You Raise Me Up is out now. He'll be touring the UK with this album next year.

Caption: TALENT: With David Tennant in Dr Who, left, Torchwood, above, and Strictly, right