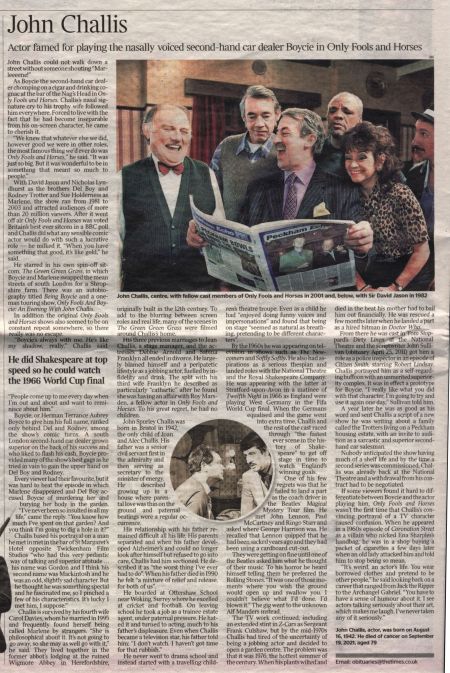 John Challis could not walk down a street without someone shouting "Mar-leeeene!"

As Boycie the second-hand car dealer chomping on a cigar and drinking cognac at the bar of the Nag's Head in Only Fools and Horses, Challis's nasal signature cry to his trophy wife followed him everywhere. Forced to live with the fact that he had become inseparable from his on-screen character, he came to cherish it.

"We knew that whatever else we did, however good we were in other roles, the most famous thing we'd ever do was Only Fools and Horses," he said. "It was just so big. But it was wonderful to be in something that meant so much to people."

With David Jason and Nicholas Lyndhurst as the brothers Del Boy and Rodney Trotter and Sue Holderness as Marlene, the show ran from 1981 to 2003 and attracted audiences of more than 20 million viewers. After it went off air Only Fools and Horses was voted Britain's best ever sitcom in a BBC poll and Challis did what any sensible comic actor would do with such a lucrative role — he milked it. "When you have something that good, it's like gold," he said.

He starred in his own spin-off sitcom, The Green Green Grass, in which Boycie and Marlene swapped the mean streets of south London for a Shropshire farm. There was an autobiography titled Being Boycie and a one-man touring show, Only Fools And Boy-cie: An Evening With John Challis.

In addition the original Only Fools and Horses shows also seemed to be on constant repeat somewhere, so there really was no escape.

"Boycie's always with me. He's like my shadow, really," Challis said.

"People come up to me every day when I'm out and about and want to reminisce about him."

Boycie, or Herman Terrance Aubrey Boyce to give him his full name, ranked only behind Del and Rodney, among the show's comic turns. A south London second-hand car dealer grown superior on the back of his success and who liked to flash his cash, Boycie provided many of the show's best gags as he tried in vain to gain the upper hand on Del Boy and Rodney.

Every viewer had their favourite, but it was hard to beat the episode in which Marlene disappeared and Del Boy accused Boycie of murdering her and burying her body in the garden. "I've never been so insulted in all my life," came the reply. "You know how much I've spent on that garden? And you think I'm going to dig a hole in it?" Challis based his portrayal on a man he met in met in the bar of St Margaret's Hotel opposite Twickenham Film Studios "who had this very pedantic way of talking and superior attitude ... his name was Gordon and I think his second name was Mackintosh and he was an odd, slightly sad character. But he thought he was something special and he fascinated me, so I pinched a few of his characteristics. It's lucky I met him, I suppose."

Challis is survived by his fourth wife Carol Davies, whom he married in 1995 and frequently found herself being called Marlene by strangers. "She is philosophical about it. It's not going to go away, so she may as well go with it," he said. They lived together in the former abbot's lodging at the ruined Wigmore Abbey in Herefordshire, originally built in the 12th century. To add to the blurring between screen roles and real life, many of the scenes in The Green Green Grass were filmed around Challis's home.

His three previous marriages to Jean Challis, a stage manager, and the actress Debbie Arnold and Sabina Franklyn all ended in divorce. He largely blamed himself and a peripatetic lifestyle as a jobbing actor, fuelled by infidelity and drink. The split with his third wife Franklyn he described as particularly "cathartic" after he found she was having an affair with Roy Marsden, a fellow actor in Only Fools and Horses. To his great regret, he had no children.

John Spurley Challis was born in Bristol in 1942, the only child of Joan and Alec Challis. His father was a senior civil servant first in the admiralty and then serving as secretary to the minister of energy. He described growing up in a house where parental love was thin on the ground and paternal beatings were a regular occurrence.

His relationship with his father remained difficult all his life. His parents separated and when his father developed Alzheimer's and could no longer look after himself but refused to go into care, Challis had him sectioned. He described it as "the worst thing I've ever had to do". When his father died in 1990 he felt "a mixture of relief and release, for both of us".

He boarded at Ottershaw School near Woking, Surrey where he excelled at cricket and football. On leaving school he took a job as a trainee estate agent, under paternal pressure. He hated it and turned to acting, much to his father's displeasure. Even when Challis became a television star, his father told him: "I don't watch. I haven't got time for that rubbish."

He never went to drama school and instead started with a travelling children's theatre troupe. Even as a child he had "enjoyed doing funny voices and impersonations" and found that being on stage "seemed as natural as breathing, pretending to be different characters."

By the 1960s he was appearing on television in shows such as The Newcomers and Softly Softly. He also had aspirations as a serious thespian and landed roles with the National Theatre and the Royal Shakespeare Company. He was appearing with the latter at Stratford-upon-Avon in a matinee of Twelfth Night in 1966 as England were playing West Germany in the Fifa World Cup final. When the Germans equalised and the game went into extra time, Challis and the rest of the cast raced through "the fastest ever scene in the history of Shakespeare" to get off stage in time to watch England's winning goals.

One of his few regrets was that he failed to land a part as the coach driver in the Beatles' Magical Mystery Tour film. He met John Lennon, Paul McCartney and Ringo Starr and asked where George Harrison was. He recalled that Lennon quipped that he had been sacked years ago and they had been using a cardboard cut-out.

They were getting on fine until one of the Beatles asked him what he thought of their music. To his horror he heard himself telling them he preferred the Rolling Stones. "It was one of those moments where you wish the ground would open up and swallow you. I couldn't believe what I'd done. I'd blown it." The gig went to the unknown Alf Manders instead.

The TV work continued, including an extended stint in Z-Cars as Sergeant Frank Culshaw, but by the mid-1970s Challis had tired of the uncertainty of being a jobbing actor and decided to open a garden centre. The problem was that it was 1976, the hottest summer of the century. When his plants wilted and died in the heat his mother had to bail him out financially. He was rescued a few months later when he landed a part as a hired hitman in Doctor Who.

From there he was cast in Tom Stoppard's Dirty Linen of the National Theatre and the scriptwriter John Sullivan (obituary April 25, 2011) got him a role as a police inspector in an episode of Citizen Smith, starring Robert Lindsay. Challis portrayed him as a self-regarding buffoon with an unmerited superiority complex. It was in effect a prototype for Boycie. "I really like what you did with that character, I'm going to try and use it again one day," Sullivan told him.

A year later he was as good as his word and sent Challis a script of a new show he was writing about a family called the Trotters living on a Peckham housing estate, with an invite to audition as a sarcastic and superior secondhand car salesman.

Nobody anticipated the show having much of a shelf life and by the time a second series was commissioned, Challis was already back at the National Theatre and a withdrawal from his contract had to be negotiated.

If some viewers found it hard to differentiate between Boycie and the actor playing him, Only Fools and Horses wasn't the first time that Challis's convincing portrayal of a TV character caused confusion. When he appeared in a 1960s episode of Coronation Street as a villain who nicked Ena Sharples's handbag, he was in a shop buying a packet of cigarettes a few days later when an old lady attacked him and told him to stop being so mean.

"It's weird, an actor's life. You wear borrowed clothes and pretend to be other people," he said looking back on a career that ranged from Jack the Ripper to the Archangel Gabriel. "You have to have a sense of humour about it. I see actors talking seriously about their art, which makes me laugh. I've never taken any of it seriously."

Caption: John Challis, centre, with fellow cast members of Only Fools and Horses in 2001 and, below, with Sir David Jason in 1982