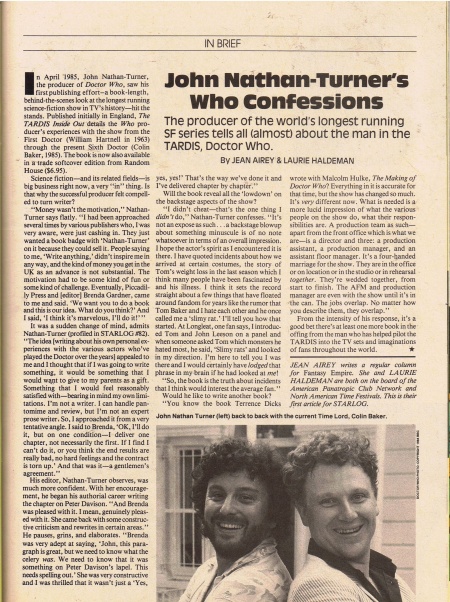 The producer of the world's longest running SF series tells all (almost) about the man in the TARDIS, Doctor Who.

In April 1985, John Nathan-Turner, the producer of Doctor Who, saw his first publishing effort—a book-length, behind-the-scenes look at the longest running science-fiction show in TV's history—hit the stands. Published initially in England, The TARDIS Inside Out details the Who producer's experiences with the show from the First Doctor (William Hartnell in 1963) through the present Sixth Doctor (Colin Baker, 1985). The book is now also available in a trade softcover edition from Random House ($6.95).

Science fiction—and its related fields—is big business right now, a very "in" thing. Is that why the successful producer felt compelled to turn writer?

"Money wasn't the motivation," Nathan-Turner says flatly. "I had been approached several times by various publishers who, I was very aware, were just cashing in. They just wanted a book badge with 'Nathan-Turner' on it because they could sell it. People saying to me, 'Write anything,' didn't inspire me in any way, and the kind of money you get in the UK as an advance is not substantial. The motivation had to be some kind of fun or some kind of challenge. Eventually, Piccadilly Press and [editor] Brenda Gardner, came to me and said. 'We want you to do a book and this is our idea. What do you think?' And I said, 'I think it's marvelous, I'll do it!' "

It was a sudden change of mind, admits Nathan-Turner (profiled in STARLOG #82). "The idea [writing about his own personal experiences with the various actors who've played the Doctor over the years] appealed to me and I thought that if I was going to write something, it would be something that I would want to give to my parents as a gift. Something that I would feel reasonably satisfied with—bearing in mind my own limitations. I'm not a writer. I can handle pantomime and review, but I'm not an expert prose writer, So, I approached it from a very tentative angle. I said to Brenda, 'OK, I'll do it, but on one condition—I deliver one chapter, not necessarily the first. If I find I can't do it, or you think the end results are really bad, no hard feelings and the contract is torn up.' And that was it—a gentlemen's agreement."

His editor, Nathan-Turner observes, was much more confident. With her encouragement, he began his authorial career writing the chapter on Peter Davison. "And Brenda was pleased with it. I mean, genuinely pleased with it. She came back with some constructive criticism and rewrites in certain areas." He pauses, grins, and elaborates. "Brenda was very adept at saying, 'John, this paragraph is great, but we need to know what the celery was. We need to know that it was something on Peter Davison's lapel. This needs spelling out.' She was very constructive and I was thrilled that it wasn't just a 'Yes, yes, yes!' That's the way we've done it and I've delivered chapter by chapter."

Will the book reveal all the 'lowdown' on the backstage aspects of the show?

"I didn't cheat—that's the one thing I didn't do," Nathan-Turner confesses. "It's not an expose as such ... a backstage blowup about something minuscule is of no note whatsoever in terms of an overall impression. I hope the actor's spirit as I encountered it is there. I have quoted incidents about how we arrived at certain costumes, the story of Tom's weight loss in the last season which I think many people have been fascinated by and his illness. I think it sets the record straight about a few things that have floated around fandom for years like the rumor that Tom Baker and I hate each other and he once called me a 'slimy rat.' I'll tell you how that started. At Longleat, one fan says, I introduced Tom and John Leeson on a panel and when someone asked Tom which monsters he hated most, he said, 'Slimy rats' and looked in my direction. I'm here to tell you I was there and I would certainly have lodged that phrase in my brain if he had looked at me!

"So, the book is the truth about incidents that I think would interest the average fan."

"You know the book Terrence Dicks wrote with Malcolm Hulke, The Making of Doctor Who? Everything in it is accurate for that time, but the show has changed so much. It's very different now. What is needed is a more lucid impression of what the various people on the show do, what their responsibilities are. A production team as such—apart from the front office which is what we are—is a director and three: a production assistant, a production manager, and an assistant floor manager. It's a four-handed marriage for the show. They are in the office or on location or in the studio or in rehearsal together. They're wedded together, from start to finish. The AFM and production manager are even with the show until it's in the can. The jobs overlap. No matter how you describe them, they overlap."

From the intensity of his response, it's a good bet there's at least one more book in the offing from the man who has helped pilot the TARDIS into the TV sets and imaginations of fans throughout the world.

JEAN AIREY writes a regular column for Fantasy Empire. She and LAURIE HALDEMAN are both on the board of the American Panatropic Club Network and North American Time Festivals. This is their first article for STARLOG.

Caption: John Nathan Turner (left) back to back with the current Time Lord, Colin Baker.