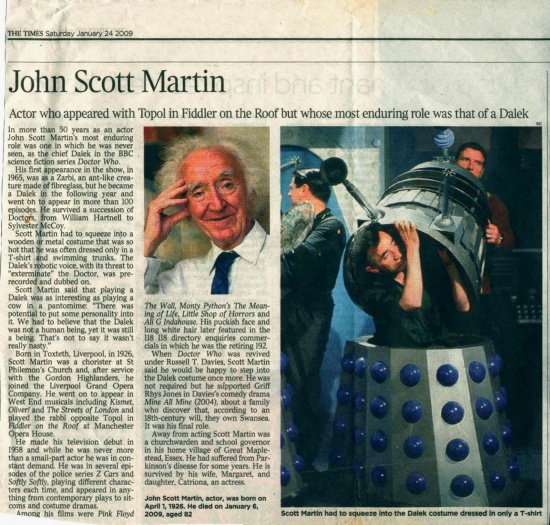 In more than 50 years as an actor John Scott Martin's most enduring role was one in which he was never seen, as the chief Dalek in the BBC science fiction series Doctor Who.

His first appearance in the show, in 1965, was as a Zarbi, an ant-like creature made of fibreglass, but he became a Dalek in the following year and went on to appear in more than 100 episodes. He survived a succession of Doctors, from William Hartnell to Sylvester McCoy.

Scott Martin had to squeeze into a wooden or metal costume that was so hot that he was often dressed only in a T-shirt and swimming trunks. The Dalek's robotic voice, with its threat to "exterminate" the Doctor, was prerecorded and dubbed on.

Scott Martin said that playing a Dalek was as interesting as playing a cow in a pantomime: "There was potential to put some personality into it. We had to believe that the Dalek was not a human being, yet it was still a being. That's not to say it wasn't really nasty."

Born in Toxteth, Liverpool, in 1926, Scott Martin was a chorister at St Philemon's Church and, after service with the Gordon Highlanders, he joined the Liverpool Grand Opera Company. He went on to appear in West End musicals including Kismet, Oliver! and The Streets of London and played the rabbi opposite Topol in Fiddler on the Roof at Manchester Opera House.

He made his television debut in 1958 and while he was never more than a small-part actor he was in constant demand. He was in several episodes of the police series Z Cars and Softly Softly, playing different characters each time, and appeared in anything from contemporary plays to sitcoms and costume dramas.

Among his films were Pink Floyd The Wall, Monty Python's The Meaning of Life, Little Shop of Horrors and Ali G Indahouse. His puckish face and long white hair later featured in the 118 118 directory enquiries commercials in which he was the retiring 192.

When Doctor Who was revived under Russell T. Davies, Scott Martin said he would be happy to step into the Dalek costume once more. He was not required but he supported Griff Rhys Jones in Davies's comedy drama Mine All Mine (2004), about a family who discover that, according to an 18th-century will, they own Swansea. It was his final role.

Away from acting Scott Martin was a churchwarden and school governor in his home village of Great Maple-stead, Essex. He had suffered from Parkinson's disease for some years. He is survived by his wife, Margaret, and daughter, Catriona, an actress.

Caption: Scott Martin had to squeeze Into the Dalek costume dressed in only a T-shirt