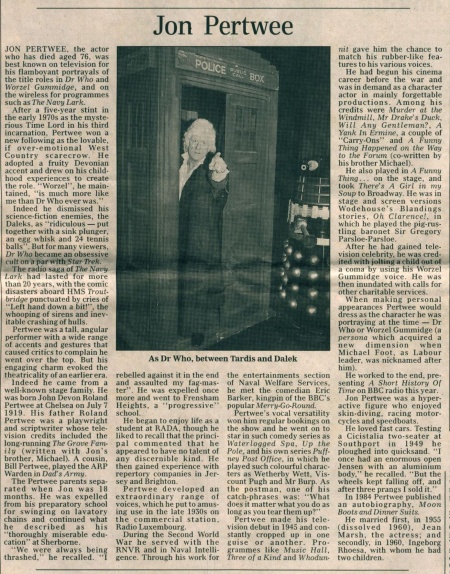 JON PERTWEE, the actor who has died aged 76, was best known on television for his flamboyant portrayals of the title roles in Dr Who and Worzel Gummidge, and on the wireless for programmes such as The Navy Lark.

After a five-year stint in the early 1970s as the mysterious Time Lord in his third incarnation, Pertwee won a new following as the lovable, if over-emotional West Country scarecrow. He adopted a fruity Devonian accent and drew on his childhood experiences to create the role. "Worzel", he maintained, "is much more like me than Dr Who ever was."

Indeed he dismissed his science-fiction enemies, the Daleks, as "ridiculous - put together with a sink plunger, an egg whisk and 24 tennis balls". But for many viewers, Dr Who became an obsessive cult on a par with Star Trek. The radio saga of The Navy Lark had lasted for more than 20 years, with the comic disasters aboard HMS Troutbridge punctuated by cries of "Left hand down a bit!", the whooping of sirens and inevitable crashing of hulls.

Pertwee was a tall, angular performer with a wide range of accents and gestures that caused critics to complain he went over the top. But his engaging charm evoked the theatricality of an earlier era. Indeed he came from a well-known stage family. He was born John Devon Roland Pertwee at Chelsea on July 7 1919. His father Roland Pertwee was a playwright and scriptwriter whose television credits included the long-running The Grove Family (written with Jon's brother, Michael). A cousin, Bill Pertwee, played the ARP Warden in Dad's Army.

The Pertwee parents separated when Jon was 18 months old. He was expelled from his preparatory school for swinging on lavatory chains and continued what he described as his "thoroughly miserable education" at Sherborne. "We were always being thrashed," he recalled. "I rebelled against it in the end and assaulted my fag-master". He was expelled once more and went to Frensham Heights, a "progressive" school.

He began to enjoy life as a student at RADA, though he liked to recall that the principal commented that he appeared to have no talent of any discernible kind. He then gained experience with repertory companies in Jersey and Brighton. Pertwee developed an extraordinary range of voices, which he put to amusing use in the late 1930s on the commercial station, Radio Luxembourg.

During the Second World War he served with the RNVR and in Naval Intelligence. Through his work for the entertainments section of Naval Welfare Services, he met the comedian Eric Barker, kingpin of the BBC's popular Merry-Go-Round. Pertwee's vocal versatility won him regular bookings on the show and he went on to star in such comedy series as Waterlogged Spa, Up the Pole, and his own series Puffney Post Office, in which he played such colourful characters as Wetherby Wett, Viscount Pugh and Mr Burp. As the postman, one of his catch-phrases was: "What does it matter what you do as long as you tear them up?"

Pertwee made his television debut in 1945 and constantly cropped up in one guise or another. Programmes like Music Hall, Three of a Kind and Whodunnit gave him the chance to match his rubber-like features to his various voices.

He had begun his cinema career before the war and was in demand as a character actor in mainly forgettable productions. Among his credits were Murder at the Windmill, Mr Drake's Duck, Will Any Gentleman?, A Yank In Ermine, a couple of "Carry-Ons" and A Funny Thing Happened on the Way to the Forum (co-written by his brother Michael).

He also played in A Funny Thing . . . on the stage, and took There's A Girl in my Soup to Broadway. He was in stage and screen versions Wodehouse's Blandings stories, Oh Clarence!, in which he played the pig-rustling baronet Sir Gregory Parsloe-Parsloe.

After he had gained television celebrity, he was credited with jolting a child out of a coma by using his Worzel Gummidge voice. He was then inundated with calls for other charitable services. When making personal appearances Pertwee would dress as the character he was portraying at the time - Dr Who or Worzel Gummidge (a persona which acquired a new dimension when Michael Foot, as Labour leader, was nicknamed after him).

He worked to the end, presenting A Short History Of Time on BBC radio this year. Jon Pertwee was a hyper-active figure who enjoyed skin-diving, racing motorcycles and speedboats.

He loved fast cars. Testing a Cicistalia two-seater at Southport in 1949 he ploughed into quicksand. "I once had an enormous open Jensen with an aluminium body," he recalled. "But the wheels kept falling off, and after three prangs I sold it."

In 1984 Pertwee published an autobiography, Moon Boots and Dinner Suits. He married first, in 1955 (dissolved 1960), Jean Marsh, the actress; and secondly, in 1960, Ingeborg Rhoesa, with whom he had two children.