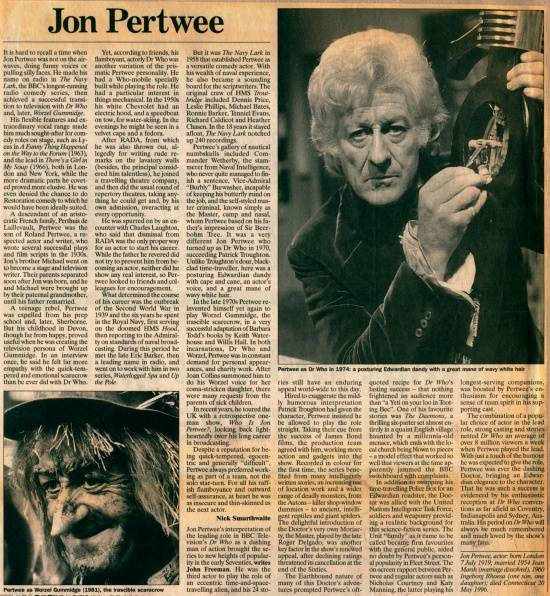 It is hard to recall a time when Jon Pertwee was not on the airwaves, doing funny voices or pulling silly faces. He made his name on radio in The Navy Lark, the BBC's longest-running radio comedy series, then achieved a successful transition to television with Dr Who and, later, Worzel Gummidge.

His flexible features and extraordinary vocal range made him much sought-after for comedy roles on stage, such as Lycus in A Funny Thing Happened on the Way to the Forum (1963), and the lead in There's a Girl in My Soup (1966), both in London and New York, while the more dramatic parts he coveted proved more elusive. He was even denied the chance to do Restoration comedy to which he would have been ideally suited.

A descendant of an aristocratic French family, Perthuis de Laillevault, Pertwee was the son of Roland Pertwee, a respected actor and writer, who wrote several successful plays and film scripts in the 1930s. Jon's brother Michael went on to become a stage and television writer. Their parents separated soon after Jon was born, and he and Michael were brought up by their paternal grandmother, until his father remarried.

A teenage rebel, Pertwee was expelled from his prep school and, later, Sherborne. But his childhood in Devon, though far from happy, proved useful when he was creating the television persona of Worzel Gummidge. In an interview once, he said he felt far more empathy with the quick-tempered and emotional scarecrow than be ever did with Dr Who.

Yet, according to friends, his flamboyant, actorly Dr Who was another variation of the prismatic Pertwee personality. He had a Who-mobile specially built while playing the role. He had a particular interest in things mechanical. In the 1950s his white Chevrolet had an electric hood, and a speedboat on tow, for water-skiing. In the evenings he might be seen in a velvet cape and a fedora.

After RADA, from which he was also thrown out, allegedly for writing rude remarks on the lavatory walls (besides, the principal considered him talentless), he joined a travelling theatre company, and then did the usual round of repertory theatres, taking anything he could get and, by his own admission, overacting at every opportunity.

He was spurred on by an encounter with Charles Laughton, who said that dismissal from RADA was the only proper way for an actor to start his career. While the father he revered did not try to prevent him from becoming an actor, neither did he show any real interest, so Per-twee looked to friends and colleagues for encouragement.

What determined the course of his career was the outbreak of the Second World War in 1939 and the six years he spent in the Royal Navy, first serving on the doomed HMS Hood, then reporting to the Admiralty on standards of naval broadcasting. During this period he met the late Eric Barker, then a leading name in radio, and went on to work with him in two series, Waterlogged Spa and Up the Pole.

But it was The Navy Lark in 1958 that established Pertwee as a versatile comedy actor. With his wealth of naval experience, he also became a sounding board for the scriptwriters. The original crew of HMS Trout-bridge included Dennis Price, Leslie Phillips, Michael Bates, Ronnie Barker, Tenniel Evans, Richard Caldicot and Heather Chasen. In the 18 years it stayed afloat, The Navy Lark notched up 240 recordings.

Pertwee's gallery of nautical numbskulls included Commander Wetherby, the stammerer from Naval Intelligence, who never quite managed to finish a sentence, Vice-Admiral "Burbly" Burwasher, incapable of keeping his butterfly mind on the job, and the self-styled master criminal, known simply as the Master, camp and nasal, whom Pertwee based on his father's impression of Sir Beerbohm Tree. It was a very different Jon Pertwee who turned up as Dr Who in 1970, succeeding Patrick Troughton. Unlike Troughton's dour, black-clad time-traveller, here was a posturing Edwardian dandy with cape and cane, an actor's voice, and a great mane of wavy white hair.

In the late 1970s Pertwee reinvented himself yet again to play Worzel Gummidge, the irascible scarecrow, in a very successful adaptation of Barbara Todd's books by Keith Waterhouse and Willis Hall. In both incarnations, Dr Who and Worzel, Pertwee was in constant demand for personal appearances, and charity work. After Joan Collins summoned him to do his Worzel voice for her coma-stricken daughter, there were many requests from the parents of sick children.

In recent years, he toured the UK with a retrospective one-man show, Who Is Jon Pertwee?, looking back lightheartedly over his long career in broadcasting.

Despite a reputation for being quick-tempered, egocentric and generally "difficult", Pertwee always preferred working as part of a team, not the solo star-turn. For all his raffish flamboyance and outward self-assurance, at heart he was as insecure and thin-skinned as the next actor.

Jon Pertwee's interpretation of the leading role in BBC Television's Dr Who as a dashing man of action brought the series to new heights of popularity in the early Seventies, writes John Freeman. He was the third actor to play the role of an eccentric time-and-space-travelling alien, and his 24 stories still have an enduring appeal world-wide to this day.

Hired to exaggerate the mildly humorous interpretation Patrick Troughton had given the character, Pertwee insisted he be allowed to play the role straight. Taking their cue from the success of James Bond films, the production team agreed with him, working more action and gadgets into the show. Recorded in colour for the first time, the series benefited from many intelligently written stories, an increasing use of location work and a wider range of deadly monsters, from the Autons - killer shop-window dummies - to ancient, intelligent reptiles and giant spiders. The delightful introduction of the Doctor's very own Moriarty, the Master, played by the late Roger Delgado, was another key factor in the show's renewed appeal, after declining ratings threatened its cancellation at the end of the Sixties.

The Earthbound nature of many of this Doctor's adventures prompted Pertwee's oft-quoted recipe for Dr Who's lasting success - that nothing frightened an audience more than "a Yeti on your loo in Tooting Bec". One of his favourite stories was The Daemons, a thrilling six-parter set almost entirely in a quaint English village haunted by a millennia-old menace, which ends with the local church being blown to pieces - a model effect that worked so well that viewers at the time apparently jammed the BBC switchboard with complaints.

In addition to swapping his time-travelling Police Box for an Edwardian roadster, the Doctor was allied with the United Nations Intelligence Task Force, soldiers and weaponry providing a realistic background for this science-fiction series. The Unit "family" as it came to be called became firm favourites With the general public, aided no doubt by Pertwee's personal popularity in Fleet Street. The on-screen rapport between Per-twee and regular actors such as Nicholas Courtney and Katy Manning, the latter playing his longest-serving companions. was boosted by Pertwee's enthusiasm for encouraging a sense of team spirit in his supporting cast.

The combination of a popular choice of actor in the lead role, strong casting and stories> netted Dr Who an average of over 8 million viewers a week when Pertwee played the lead. With just a touch of the humour he was expected to give the role, Pertwee was ever the dashing Doctor, bringing an Edwardian elegance to the character. That he was such a success is evidenced by his enthusiastic reception at Dr Who conventions as far afield as Coventry, Indianapolis and Sydney, Australia. His period on Dr Who will always be much remembered and much loved by the show's matey fans.

Caption: Pertwee as Dr Who in 1974: a posturing Edwardian dandy with a great mane of wavy white hair