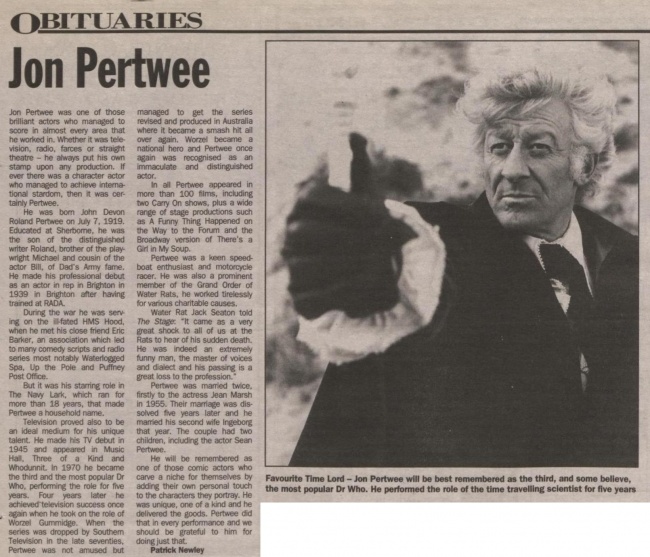 Jon Pertwee was one of those brilliant actors who managed to score in almost every area that he worked in. Whether it was television, radio. farces or straight theatre - he always put his own stamp upon any production. If ever there was a character actor who managed to achieve international stardom, then it was certainly Pertwee.

He was born John Devon Roland Pertwee on July 7, 1919. Educated at Sherborne, he was the son of the distinguished writer Roland, brother of the playwright Michael and cousin of the actor Bill. of Dad's Army fame. He made his professional debut as an actor in rep in Brighton in 1939 in Brighton after having trained at RADA.

During the war he was serving on the ill-fated HMS Hood, when he met his close friend Eric Barker, an association which led to many comedy scripts and radio series most notably Waterlogged Spa, Up the Pole and Puffney Post Office.

But it was his starring role in The Navy Lark, which ran for more than 18 years, that made Pertwee a household name.

Television proved also to be an ideal medium for his unique talent. He made his TV debut in 1945 and appeared in Music Hall, Three of a Kind and Whodunnit. In 1970 he became the third and the most popular Dr Who, performing the role for five years. Four years later he achieved television success once again when he took on the role of Worzel Gummidge. When the series was dropped by Southern Television in the late seventies, Pertwee was not amused but managed to get the series revised and produced in Australia where it became a smash hit all over again. Worzel became a national hero and Pertwee once again was recognised as an immaculate and distinguished actor.

In all Pertwee appeared in more than 100 films, including two Carry On shows, plus a wide range of stage productions such as A Funny Thing Happened on the Way to the Forum and the Broadway version of There's a Girt in My Soup.

Pertwee was a keen speedboat enthusiast and motorcycle racer. He was also a prominent member of the Grand Order of Water Rats, he worked tirelessly for various charitable causes.

Water Rat Jack Seaton told The Stage: "It came as a very great shock to all of us at the Rats to hear of his sudden death. He was indeed an extremely funny man, the master of voices and dialect and his passing is a great loss to the profession."

Pertwee was married twice. firstly to the actress Jean Marsh in 1955. Their marriage was dissolved five years later and he married his second wife Ingeborg that year. The couple had two children, including the actor Sean Pertwee.

He will be remembered as one of those comic actors who carve a niche for themselves by adding their own personal touch to the characters they portray. He was unique, one of a kind and he delivered the goods. Pertwee did that in every performance and we should be grateful to him for doing just that.