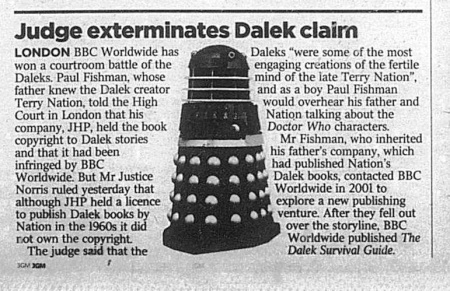 LONDON BBC Worldwide has won a courtroom battle of the Daleks. Paul Fishman, whose father knew the Dalek creator Terry Nation, told the High Court in London that his company, JHP, held the book copyright to Dalek stories and that it had been infringed by BBC Worldwide. But Mr Justice Norris ruled yesterday that although JHP held a licence to publish Dalek books by Nation in the 1960s it did not own the copyright.

The judge said that the Daleks were some of the most engaging creations of the fertile mind of the late Terry Nation and as a boy Paul Fishman would overhear his father and Nation talking about the Doctor Who characters. Mr Fishman, who inherited his father's company, which had published Nation's Dalek books, contacted BBC Worldwide in 2001 to explore a new publishing venture. After they fell out over the storyline, BBC Worldwide published The Dalek Survival Guide.