Just Who the Doctor ordered ... 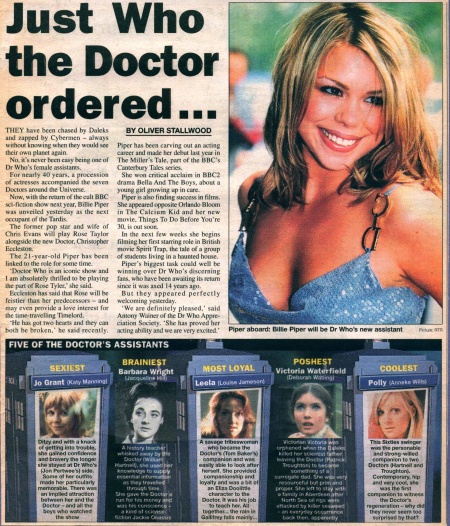 THEY have been chased by Daleks and zapped by Cybermen — always without knowing when they would see their own planet again.

No, it's never been easy being one of Dr Who's female assistants.

For nearly 40 years, a procession of actresses accompanied the seven Doctors around the Universe.

Now, with the return of the cult BBC sci-fiction show next year, Billie Piper was unveiled yesterday as the next occupant of the Tardis.

The former pop star and wife of Chris Evans will play Rose Taylor alongside the new Doctor, Christopher Eccleston.

The 21-year-old Piper has been linked to the role for some time.

'Doctor Who is an iconic show and I am absolutely thrilled to be playing the part of Rose Tyler,' she said.

Eccleston has said that Rose will be feistier than her predecessors — and may even provide a love interest for the time-travelling Timelord.

'He has got two hearts and they can both be broken,' he said recently. Piper has been carving out an acting career and made her debut last year in The Miller's Tale, part of the BBC's Canterbury Tales series.

She won critical acclaim in BBC2 drama Bella And The Boys, about a young girl growing up in care.

Piper is also finding success in films. She appeared opposite Orlando Bloom in The Calcium Kid and her new movie, Things To Do Before You're 30, is out soon.

In the next few weeks she begins filming her first starring role in British movie Spirit Trap, the tale of a group of students living in a haunted house.

Piper's biggest task could well be winning over Dr Who's discerning fans, who have been awaiting its return since it was axed 14 years ago.

But they appeared perfectly welcoming yesterday.

'We are definitely pleased,' said Antony Wainer of the Dr Who Appreciation Society. 'She has proved her acting ability and we are very excited.'

FIVE OF THE DOCTOR'S ASSISTANTS

Ditty and with a knack of getting into trouble, she gained confidence and bravery the longer, she stayed at Dr Who's 3 (Jon Pertwee's) side. Some of her outfits made her particularly memorable. There was an implied attraction between her and the Doctor - and all the boys who watched the show

A history teacher whisked away by the Doctor (William Hartnell), she used her knowledge to supply essential information as they travelled through time. She gave the Doctor a run for his money and was his conscience - a kid of science-fiction Jackie Onassis

A savage tribeswoman who became the Doctor's (Tom Baker's) companion and was easily able to look after herself. She provided companionship and loyalty and was a bit of an Eliza Doolittle character to the Doctor. It was his job to teach her. All together... the rain in Gallifrey falls mainly...

Victorian Victoria was orphaned when the Daleks killed her scientist father, leaving the Doctor (Patrick Troughton) to become something of a surrogate dad. She was very resourceful but prim and proper. She left to stay with a family in Aberdeen after North Sea oil rigs were attacked by killer seaweed - an everyday occurrence back then, apparently.

This Sixties swinger was the personable and strong-willed companion to two Doctors (Hartnell and Troughton). Contemporary, hip and very cool, she was the first companion to witness the Doctor's regeneration - why did they never seem too surprised by that?

Piper aboard: Billie Piper will be Dr Who's new assistant