Just what's Who all about? 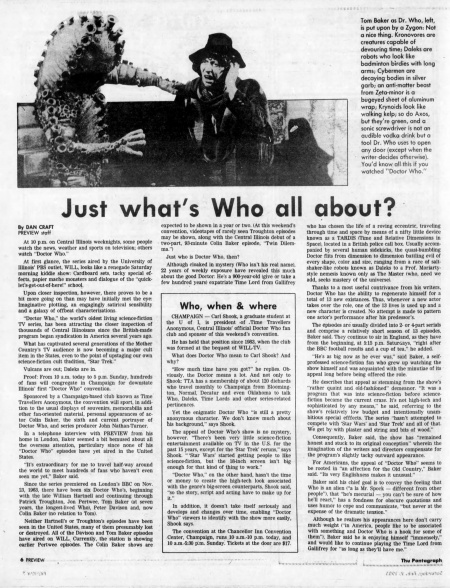 At 10 p.m. on Central Illinois weeknights, some people watch the news, weather and sports on television; others watch "Doctor Who."

At first glance, the series aired by the University of Illinois' PBS outlet, WILL, looks like a renegade Saturday morning kiddie show: Cardboard sets, tacky special effects, papier mache monsters and dialogue of the "quick-let's-get-out-of-here!" school.

Upon closer inspection, however, there proves to be a bit more going on than may have initially met the eye: Imaginative plotting, an engagingly satirical sensibility and a galaxy of offbeat characterizations.

"Doctor Who," the world's oldest living science-fiction TV series, has been attracting the closer inspection of thousands of Central Illinoisans since the British-made program began syndication in America several years ago.

What has captivated several generations of the Mother Country's TV audience is now becoming a major cult item in the States, even to the point of upstaging our own science-fiction cult tradition, "Star Trek."

Vulcans are out; Daleks are in.

Proof: From 10 a.m. today to 5 p.m. Sunday, hundreds of fans will congregate in Champaign for downstate Illinois' first "Doctor Who" convention.

Sponsored by a Champaign-based club known as Time Travellers Anonymous, the convention will sport, in addition to the usual displays of souvenirs, memorabilia and other fan-oriented material, personal appearances of actor Colin Baker, the sixth and current portrayer of Doctor Who, and series producer John Nathan-Turner.

In a telephone interview with PREVIEW from his home in London, Baker seemed a bit bemused about all the overseas attention, particulary since none of his "Doctor Who" episodes have yet aired in the United States.

"It's extraordinary for me to travel half-way around the world to meet hundreds of fans who haven't even seen me yet," Baker said.

Since the series premiered on London's BBC on Nov. 23, 1963, there have been six Doctor Who's, beginning with the late William Hartnell and continuing through Patrick Troughton, Jon Pertwee, Tom Baker (at seven years, the longest-lived Who), Peter Davison and, now Colin Baker (no relation to Tom).

Neither Hartnell's or Troughton's episodes have been seen in the United States, many of them presumably lost or destroyed. All of the Davison and Tom Baker episodes have aired on WILL. Currently, the station is showing earlier Pertwee episodes. The Colin Baker shows are expected to be shown in a year or two. (At this weekend's convention, videotapes of rarely seen Troughton episodes may be shown, along with the Central Illinois debut of a two-part, 93-minute Colin Baker episode, "Twin Dilemma.")

Just who is Doctor Who, then?

Although cloaked in mystery (Who isn't his real name), 22 years of weekly exposure have revealed this much about the good Doctor: He's a 900-year-old (give or take a few hundred years) expatriate Time Lord from Gallifrey who has chosen the life of a roving eccentric, traveling through time and space by means of a nifty little device known as a TARDIS (Time and Relative Dimensions in Space), located in a British police call box. Usually accompanied by several human sidekicks, the quasi-bumbling Doctor flits from dimension to dimension battling evil of every shape, color and size, ranging from a race of saltshaker-like robots known as Daleks to a Prof. Moriarty-style nemesis known only as The Master (who, need we add, seeks mastery of the universe).

Thanks to a most useful contrivance from his writers, Doctor Who has the ability to regenerate himself for a total of 13 new existances. Thus, whenever a new actor takes over the role, one of the 13 lives is used up and a new character is created. No attempt is made to pattern one actor's performance after his predessor's.

The episodes are usually divided into 2- or 4-part serials and comprise a relatively short season of 13 episodes, Baker said. They continue to air in England, as they have from the beginning, at 5:15 p.m. Saturdays, "right after the BBC football results and a cup of tea," he added.

"He's as big now as he ever was," said Baker, a self-professed science-fiction fan who grew up watching the show himself and was acquainted with the minutiae of its appeal long before being offered the role.

He describes that appeal as stemming from the show's "rather quaint and old-fashioned" demeanor. "It was a program that was into science-fiction before science-fiction became the current craze. It's not high-tech and sophisticated by any means," he said, referring to the show's relatively low budget and intentionally unambitious special efffects. The series "hasn't attempted to compete with 'Star Wars' and 'Star Trek' and all of that. We get by with plaster and string and bits of wood."

Consequently, Baker said, the show has "remained honest and stuck to its original conception" wherein the imagination of the writers and directors compensate for the program's slightly tacky outward appearance.

For Americans, the appeal of "Doctor Who" seems to be rooted in "an affection for the Old Country," Baker said. "Its very Englishness makes it unusual."

Baker said his chief goal is to convey the feeling that Who is an alien ("a la Mr. Spock — different from other people"), that "he's mecurial — you can't be sure of how he'll react," has a fondness for obscure quotations and uses humor to cope and communicate, "but never at the expense of the dramatic tension."

Although he realizes his appearances here don't carry much weight ("in America, people like to be associated with something and Doctor Who is a hook for some of them"), Baker said he is enjoying himself "immensely," and would like to continue playing the Time Lord from Gallifrey for "as long as they'll have me."

CHAMPAIGN — Carl Shook, a graduate student at the U of I, is president of Time Travellers Anonymous, Central Illinois' official Doctor Who fan club and sponsor of this weekend's convention.

He has held that position since 1983, when the club was formed at the bequest of WILL-TV.

What does Doctor Who mean to Carl Shook? And why?

"How much time have you got?" he replies. Obviously, the Doctor means a lot. And not only to Shook: TTA has a membership of about 120 diehards who travel monthly to Champaign from Bloomington, Normal, Decatur and even Oklahoma to talk Who, Daleks, Time Lords and other series-related pertinences.

Yet the enigmatic Doctor Who "is still a pretty anonymous character. We don't know much about his background," says Shook.

The appeal of Doctor Who's show is no mystery, however. "There's been very little science-fiction entertainment available on TV in the U.S. for the past 15 years, except for the 'Star Trek' reruns," says Shook. "'Star Wars' started getting people to like science-fiction, but the 18-inch screen isn't big enough for that kind of thing to work."

"Doctor Who," on the other hand, hasn't the time or money to create the high-tech look associated with the genre's big-screen counterparts, Shook said, "so the story, script and acting have to make up for it.

In addition, it doesn't take itself seriously and develops and changes over time, enabling "Doctor Who" viewers to identify with the show more easily, Shook says.

Caption: Tom Baker as Dr. Who, left, is put upon by a Zygon: Not a nice thing. Kronovores are creatures capable of devouring time; Daleks are robots who look like badminton birdies with long arms; Cybermen are decaying bodies in silver garb; an anti-matter beast from Zeta-minor is a bugeyed sheet of aluminum wrap; Krynoids look like walking kelp; so do Axos, but they're green, and a sonic screwdriver is not an audible vodka drink but a tool Dr. Who uses to open any door (except when the writer decides otherwise). You'd know all this if you watched "Doctor Who."