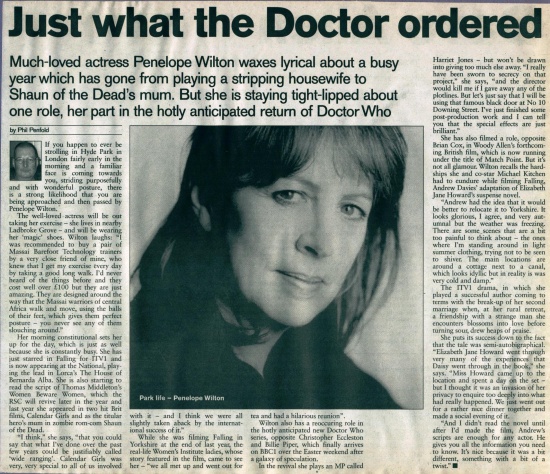 Much-loved actress Penelope Wilton waxes lyrical about a busy year which has gone from playing a stripping housewife to Shaun of the Dead's mum. But she is staying tight-lipped about one role, her part in the hotly anticipated return of Doctor Who

If you happen to ever be strolling in Hyde Park in London fairly early in the morning and a familiar face is coming towards you, striding purposefully and with wonderful posture, there is a strong likelihood that you are being approached and then passed by Penelope Wilton.

The well-loved actress will be out taking her exercise — she lives in nearby Ladbroke Grove — and will be wearing her 'magic' shoes. Wilton laughs: "I was recommended to buy a pair of Massai Barefoot Technology trainers by a very close friend of mine, who knew that I get my exercise every day by taking a good long walk. I'd never heard of the things before and they cost well over £100 but they are just amazing. They are designed around the way that the Massai warriors of central Africa walk and move, using the balls of their feet, which gives them perfect posture — you never see any of them slouching around."

Her morning constitutional sets her up for the day, which is just as well because she is constantly busy. She has just starred in Falling for ITV1 and is now appearing at the National, playing the lead in Lorca's The House of Bernarda Alba. She is also starting to read the script of Thomas Middleton's Women Beware Women, which the RSC will revive later in the year and last year she appeared in two hit Brit films, Calendar Girls and as the titular hero's mum in zombie rom-com Shaun of the Dead.

"I think," she says, "that you could say that what I've done over the past few years could be justifiably called 'wide ranging'. Calendar Girls was very, very special to all of us involved with it — and I think we were all slightly taken aback by the international success of it."

While she was filming Falling in Yorkshire at the end of last year, the real-life Women's Institute ladies, whose story featured in the film, came to see her — "we all met up and went out for tea and had a hilarious reunion".

Wilton also has a reoccuring role in the hotly anticipated new Doctor Who series, opposite Christopher Eccleston and Billie Piper, which finally arrives on BBC1 over the Easter weekend after a galaxy of speculation.

In the revival she plays an MP called Harriet Jones — but won't be drawn into giving too much else away. "I really have been sworn to secrecy on that project," she says, "and the director would kill me if I gave away any of the plotlines. But let's just say that I will be using that famous black door at No 10 Downing Street. I've just finished some post-production work and I can tell you that the special effects are just brilliant."

She has also filmed a role, opposite Brian Cox, in Woody Allen's forthcoming British film, which is now running under the title of Match Point. But it's not all glamour. Wilton recalls the hardships she and co-star Michael Kitchen had to eundure while filming Falling, Andrew Davies' adaptation of Elizabeth Jane Howard's suspense novel.

"Andrew had the idea that it would be better to relocate it to Yorkshire. It looks glorious, I agree, and very autumnal but the weather was freezing. There are some _scenes that are a bit too painful to think about — the ones where I'm standing around in light summer clothing, trying not to be seen to shiver. The main locations are around a cottage next to a canal, which looks idyllic but in reality is was very cold and damp."

The ITV1 drama, in which she played a successful author coming to terms with the break-up of her second marriage when, at her rural retreat, a friendship with a strange man she encounters blossoms into love before turning sour, drew heaps of praise.

She puts its success down to the fact that the tale was semi-autobigraphical. "Elizabeth Jane Howard went through very many of the experiences that Daisy went through in the book," she says. "Miss Howard came up to the location and spent a day on the set —but I thought it was an invasion of her privacy to enquire too deeply into what had really happened. We just went out for a rather nice dinner together and made a social evening of it.

"And I didn't read the novel until after I'd made the film, Andrew's scripts are enough for any actor. He gives you all the information you need to know. It's nice because it was a bit different, something with a bit of a twist."